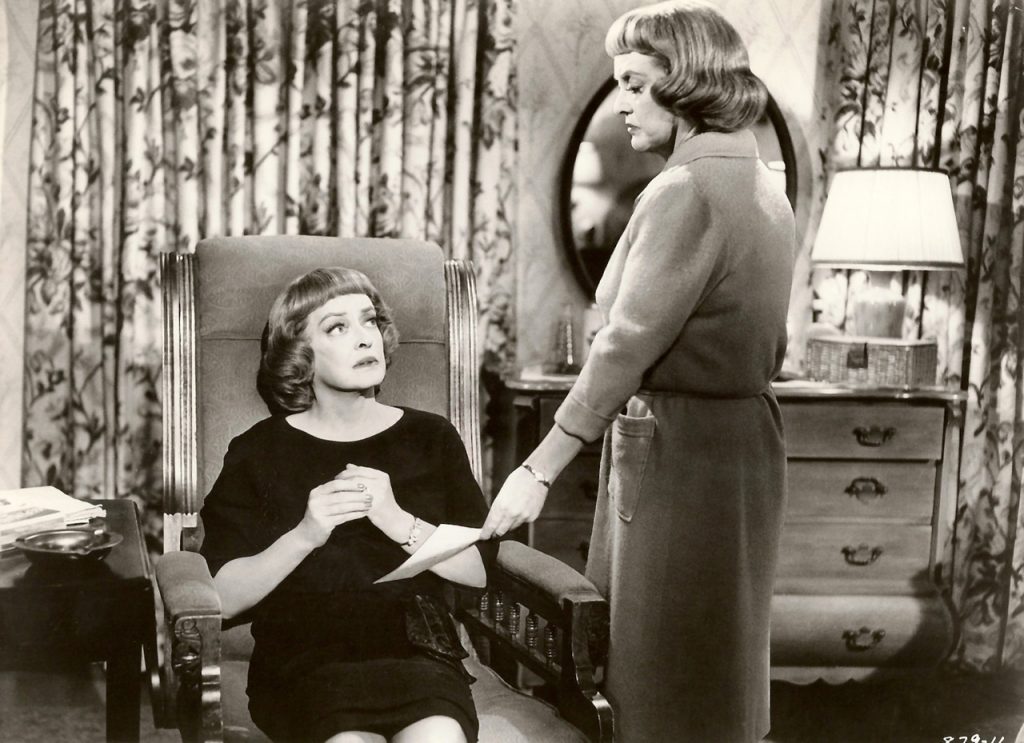 Silver Screen Slags’ profound love for the later work of screen Goddesses, Bette Davis and Joan Crawford’s later work should be clear from our feature on What Ever Happened To Baby Jane? (basically a page gushing about its brilliance) – continuing on this theme, we have decided to embrace little-seen Bette Davis masterpiece, Dead Ringer (or Dead Image).

Davis’ first US post-Baby Jane picture sees her playing twins – the glamorous and wealthy, Margaret DeLorca and her gutsy chain-smoking sister Edith “Edie” Phillips. After reuniting at the funeral of Margaret’s husband, Edie decides to invite her widowed sister back to her flat. In a spontaneous decision, Edie hatches a plan to assume Margaret’s identity – after she shoots her sister and switches their clothes, forming the guise of an apparent suicide. As she assumes her wealthy sisters’ identity, suspicions begin to rise around Edie, as well as the emergence of Margaret’s dark past.

Dead Ringer has an almost Hitchcockian structure with Albert Beich’s script being chock-full of twists and unexpected turns. This makes sense when seeing director Paul Henreid’s directorial background lay largely in episodes of Alfred Hitchcock Presents. Like all good psychological thrillers Dead Ringer is filled with a sense of brooding dread, as Edie gradually discovers the scale of the crime that she has committed. These reminders come in the form of Edie’s snooping boyfriend, who is also a police detective (entertainingly played by Karl Malden) and a scheming ex-boyfriend of Margaret’s who makes an unwelcome return.

The main highlight is Davis’ performance. It oozes camp charm – particularly when the veteran star is in the form of larger than life, lady of leisure, Margaret – a woman who loves to patronize her sister with hand-me-down clothes or patrol her manor with her huge pet doberman. Dead Ringer also boasts the best on-screen pairing since Davis’ collaboration with Joan Crawford a year earlier – the pairing of Davis and Davis. How could viewers screens handle this explosion of classy camp? Davis gets to show her sheer versatility in the opening scenes with the pair verbally jousting – using the height of 1960s split screen photography.

Dead Ringer is a tense little thriller, featuring lots of Hitchcockian twists and a captivating dual performance from Queen of Camp, Bette Davis. It’s a must see.