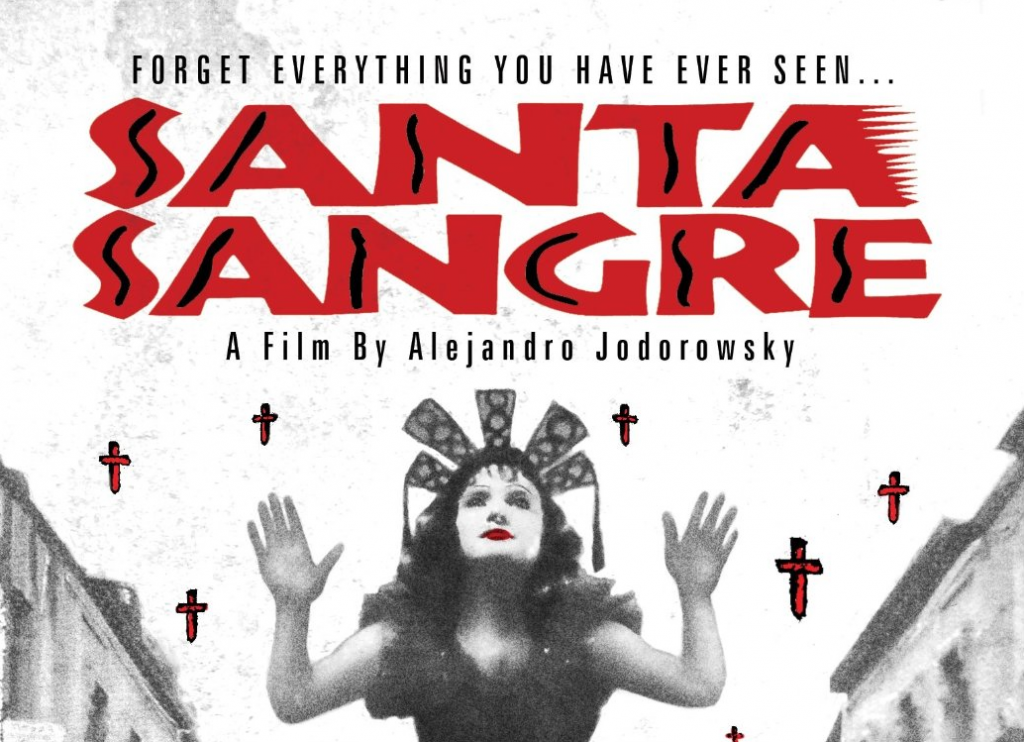 Watching an Alejandro Jodorowsky film is an exciting experience – you can expect provocative images, violent surrealism and a dreamlike narrative – all of which are on offer in his recently rereleased 1989 epic, Santa Sangre.

Jodorowsky’s feature structured in three parts: present, past and future, tells us of the life of Fenix – a Mexican circus performer. After witnessing a brutal exchange between his performer parents, Fenix is left mentally disturbed and spends much of his youth in an asylum. The future sees his escape where he rejoins his disfigured mother, where the pair soon go on a chilling campaign of murder.

Santa Sangre has been labelled as a horror film, most likely due to bucket loads of disturbing content. However, it would be uncouth to confine Jodorowsky’s film to one genre – Santa Sangre is a movie like no other, a truly surreal and unnerving experience. From the onset this is clear, and those new to Jodorowsky may be initially taken aback – it opens with a disturbed, naked feral man (the older Fenix) perched on a tree, growling at asylum staff. The weirdness continues throughout, escalating becoming more and more surreal and hallucinatory.

Jodorowsky’s style is completely unmatched, although the religious undertones and surrealism of Santa Sangre could be compared to the work of the late great Ken Russell, most notably The Devils. It is a complete visual feast with set pieces, design, and performances all tying into Jodorowsky’s greater psychedelic vision.

The nightmarish imagery proves truly haunting – mainly the twisted relationship of Fenix’s parents – most notably his father Orgo’s affair with the circus’ tattooed lady. There’s also some nasty scenes involving genitals and sulphuric acid and the chopping off of arms. However, Jodorowsky does also capture a human side to his characters from the oddball community developed by the circus performers – encapsulated in a sequence where the acts are brought together following the death of the show’s elephant. However, disturbing imagery is never far off as the elephant’s funeral soon ends in locals ripping up the creature and feasting on its flesh. Tasty.

Some may find Jodorowsky’s surrealism and style verging on crude and pretentious (which it does), but underneath this all the director presents distinct moral messages on good and evil, power relationships and revenge. When the film’s latter half finds itself falling into more straightforward horror territory, Jodorowsky’s vibrant style and craftsmanship makes sure Santa Sangre continues to grip the audience.

Santa Sangre is truly a movie like no other – Jodorowsky’s haunting and surreal visual style combined with his tackling of religion, community and revenge makes for an unforgettable experience.