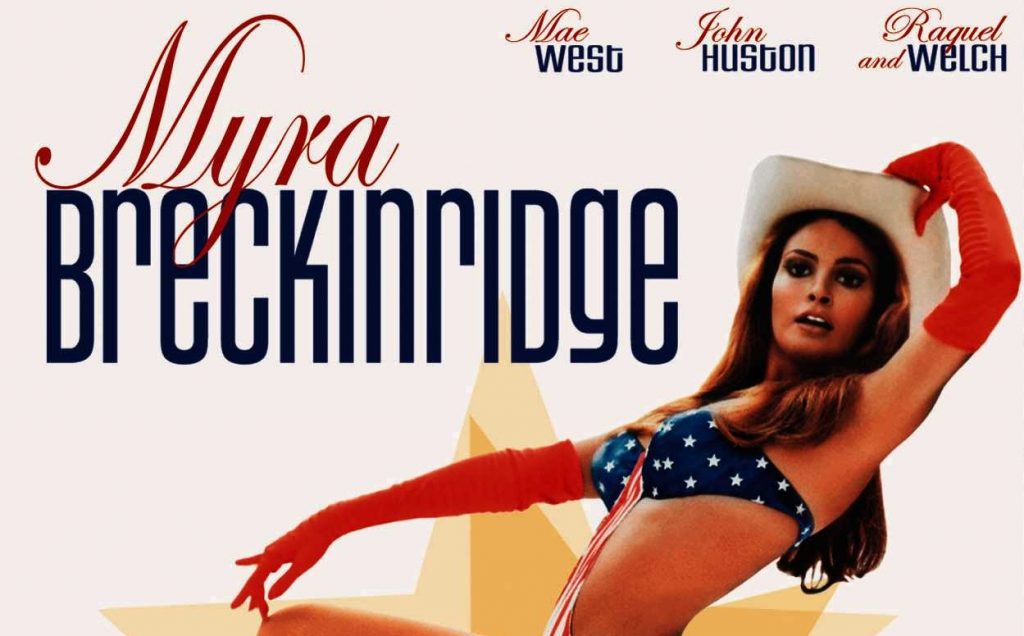 One of the first films features on Silver Screen Slags was cult masterpiece, Myra Breckinridge. We went into quite a bit of detail about its unorthodox production – from feuding leading ladies, Mae West and Raquel Welch to its unappreciated director (producers referred to Michael Sarne as a”dirty hippy”). Now after rewatching this phenomenon, we’re going to talk a little about it as it should be talked about – a work of creative genius.

Adapted from Gore Vidal’s novel, Myra Breckinridge follows film critic, Myron (Rex Reed) who becomes Myra (Raquel Welch) after a sex change. Myra sets out to her uncle’s (former Cowboy star Buck Loner, played by John Huston) acting academy where she aims to claim half of the actor’s estate. However, the tight-fisted Buck stalls, giving her a job teaching about classic Hollywood to the students. Throw in some appearances from man-eating talent agent, Leticia Van Allen (in the form of a 77 year old Mae West) and you’ve got yourself a camp classic.

Considering that Myra Breckinridge was a product of the late 1960s, it is completely ahead of its time for a Hollywood picture. Many regarded it as Fox’s take on the softcore grindhouse sex comedies of the time, however it is a great injustice to refer to Michael Sarne’s picture as simply a sex comedy. This is (should be) regarded as landmark film – being one of the first studio produced pictures to deal with homosexuality and transgender identity whilst embracing the world of classic Hollywood camp.

Stylistically, Sarne’s Myra is a fusion of Ken Russell and Fellini – just look at the elaborate fantasy dinner sequence (that Sarne supposedly spent days focusing on). Continual references to classic MGM features, add to the camp tone of the film – from the Shirley Temple sung title sequence which features ‘You Gotta Smile To Be Ha Double P‘ to clips from Tin Pan Alley and The Pride Of St. Louis. The use of these classic moments of “innocent” Hollywood nostalgia in the controversial and racy context of Myra Breckinridge, creates an unrivaled kitsch style – ensuring that this is not a film you will easily forget. This is perfectly encapsulated in the ‘Rape of Rusty sequence’ where Myra launches an attack on the ‘American man’ whilst classic film clips cheekily elaborate on her attack method.
Another striking feature of Myra comes from its fusion of classic Hollywood and the modern world. Whilst part of the film feels like a loving tribute to the Golden Years of cinema – Myra also views Hollywood as a chauvinistic, male dominated world – most visibly channeled through the character of has-been western star, Uncle Buck. Myra’s attack on the ‘Uncle Bucks’ of Hollywood can be as a reflection of the new wave of Hollywood filmmakers slowly gaining prominence. But this is not a full blown attack, Myra Breckinridge clearly has a love for the world of Hollywood, perfectly summarised by her thoughts on H.B. Warner – “Could the real Christ have possessed a fraction of the radiance and mystery of H.B. Warner in the first King of Kings?”

Myra Breckinridge is also a tale of rebalancing equality between the sexes, channeled through Raquel Welch’s headstrong performance as Myra. The title character tells us “My purpose in coming to Hollywood is the destruction of the American male in all its particulars” – Myra wants to reset gender equality between the sexes, and in doing so much destroy the American man. This unfortunately comes in the form of the handsome but naive student, Rusty (Roger Heren, who’s career came to an abrupt halt after Myra, his second film – was being riden by a screaming Raquel Welch too much for him?). Myra represents the new woman, after all she is “Myra Breckinridge, whom no man will ever possess. The new woman whose astonishing history started with a surgeon’s scalpel, and will end… who-knows-where. Just as Eve was born from Adam’s rib, so Myron died to give birth to Myra.” Not content with simply destroying Rusty, Myra the new woman, soon sets her sights on seducing Rusty’s girlfriend, Mary Ann Pringle (Farrah Fawcett)

Myra marks the return of screen Goddess, Mae West after a 27 year absence from the film business. Ironically, West plays a sex obsessed talent agent, allowing Sarne to once address realign the gender imbalance. This is not the normal older male talent agent, aiming to sleep with young starlets by promising the fulfillment their dreams – instead this power is given to Leticia Van Allen, an older woman. West playing up to her sex kitten image once again harks back to her heyday in 1930s Hollywood, however given the edgy nature of the 1970 feature, Myra allows Mae to amp up the innuendo and get away with smuttier lines. The perfect example of this being when she questions a man’s height – then responds with “Never mind about the six feet. Let’s talk about the seven inches.”

Myra may lack the subtle power and wit of Vidal’s novel, but manages to be fascinate entity of its own. The wit of Vidal’s writing is switched for a sledgehammer of camp and unparalleled artistic vision – there is nothing quite like Myra Breckinridge – Sarne takes classic Hollywood aesthetic and thrusts it right into the racy 1970s.


We think the above video perfectly sums up all there is to love about the masterpiece that is Myra Breckinridge.