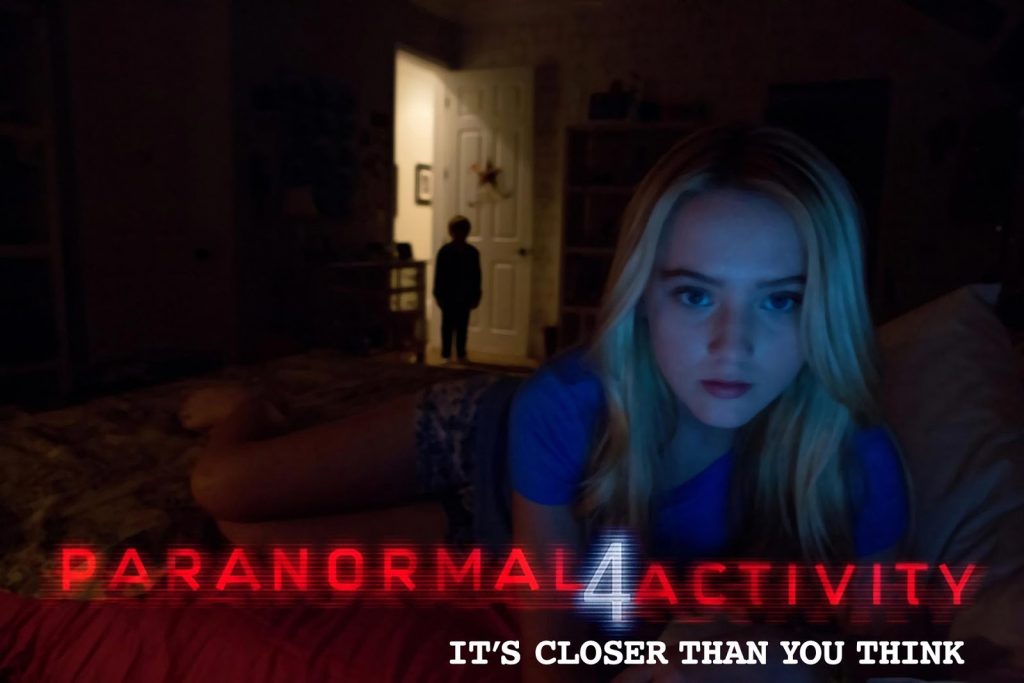 Paranormal Activity 3 was enjoyable, schlock and ended on an intriguing enough note for us to get excited about a fourth entry. How wrong we were. Paranormal Activity 4 is possibly one of the laziest, cash-driven sequels of all time, simply ignores all the promise of the strong third film’s ending.

Henry Joost and Ariel Schulman direct this tale of a suburban family who begin to notice paranormal occurrences in their home after a young woman and bizarre little boy move in across the street.

The ending of the third film in the series was exciting – we see that Katie and her sister, Kristi’s grandmother is part of a cult, linked to the demon that haunts the series. With an ending reminiscent of Eli Roth’s stellar, The Last Exorcism, we were eager to see how this would be elaborated on the fourth film. Instead of following the logical path and continuing, Christopher Landon’s screenplay simply ignores these questions and takes us to a new family for more of the played out bumps in the night and furniture moving. Exploring this cult concept seems to be forgotten about until the last few scenes of Paranormal Activity 4 which goes completely over the top, verging on sheer ridiculousness.

Instead of taking us down a moderately original route, Paranormal Activity 4 simply rehashes the traditional elements of the previous films – loud bangs, cameras set up round the house, the night by night structure, demons playing about with bed covers, yawn. Although these elements have been done to death, the Paranormal Activity films usually pick up when the family watch back the footage and discover what happens during the night, unfortunately however, this entry even manages to mess that up. Despite setting up these cameras, the family do not ever really watch the footage back – surely defeating the purpose of actually having the cameras on in the first place. That is just one of the dozens of plot holes that inflict Paranormal Activity 4.

The only time when we see Paranormal Activity 4 feature any originality is through the use of an Xbox Kinect sensor that projects motion sensor dots all round the living room. This means we can see figures and ghostly shapes moving around the room – of course, being the tired mess that this film is this, even that element is overused to the point of sheer tedium It eventually just becomes another cheap gimmick. As for the characters, Paranormal Activity 4 presents us with a bland batch of disposable victims – you know they are bad when the one you most relate to is a cat.

It’s disappointing, the third film was handled by the same directors who seemed to bring some refreshment and energy to the series – this proved short lived. When you see inventive handheld camera horror like V/H/S and Sinister, you realise how lazy and tired this effort is.