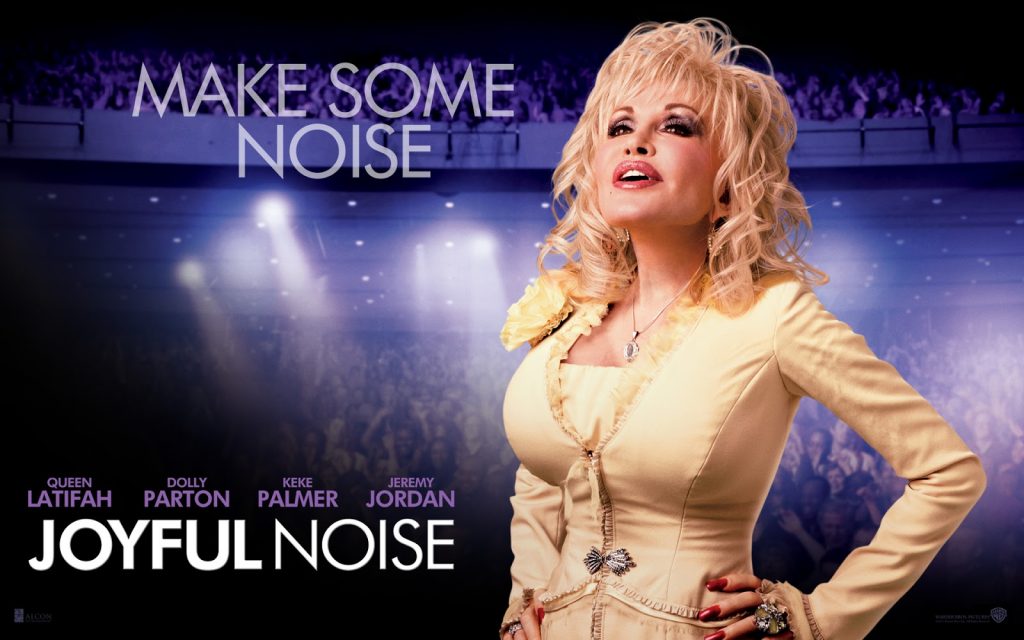 Todd Graff (Bandslam) writes and directs Joyful Noise, a tale of a gospel group in a struggling, small town who enter a national singing contest. Whilst this plotline may seem familiar, there is plenty of fun and camp value courtesy of leading ladies Dolly Parton and Queen Latifah and a funky soundtrack.

Graff’s screenplay boasts a lot of heart and likeable characters, but has its moments where the religious “Praise Jesus!” style moments can become overbearing. To a more cynical viewer, these Christian overtones may feel slightly hollow and manipulative, notably seen through the character of Walter, an autistic child who is brought out of his shell by the church. This saccharine sweet portrayal of the church is not a realistic one, but it does add to the feel-good nature of Joyful Noise. Although, hearing a gospel-tweaked rendition of Usher’s Yeah containing the line “Now my God and I are the best of homies.” would surely turn the stomach of the holiest of men.

Obviously with the above exception, the soundtrack of Joyful Noise is feel-good fun that capitalises on the vocal assets of leading ladies, Parton and Latifah. Highlights include Latifah covering Stevie Wonder’s Signed, Sealed, Delivered and an oddly fantastic Dolly Parton rendition of Chris Brown’s Forever. Country music fans are likely to get chills in a touching scene where Parton duets with Kris Kristofferson (who appears in a minor role) in a touching ballad entitled From Here to the Moon and Back.

Many viewers will be drawn to Joyful Noise, simply to see the comic exchanges between Parton and Latifah. The pair play feuding choir directors arguing whether the choir should take a modern approach to its music or continue to sing classic gospel. Graff knows how to write for the two ladies, with one sequence Parton shouting “Well I am who I am!” and Latifah replying “Maybe you were five procedures ago!” Joyful Noise is chock full of these fun moments – including one which sees Dolly hurling rolls at Queen Latifah – and yes, it is as amazing as it sounds. The country superstar is truly magnetic and at her most loveable as G.G. Sparrow. Who could resist Dolly’s cheeky wisecracks and sassy finger snaps?

Newcomers Keke Palmer and Jeremy Jordan prove themselves as two talented young stars both with wonderful voices. Unfortunately, a romantic subplot between the pair eats up more screen-time than it actually deserves.

Joyful Noise is great feel-good fun with a stellar soundtrack and terrific performances from Parton and Latifah. Some may be left feeling slightly cynical towards the film’s religious aspects but it is hard not to get caught up in the lively upbeat spirit of Joyful Noise.

For the Dolly-ites, skip to 3m 20s to hear the Queen of Country’s iconic rendition of Chris Brown’s Forever.