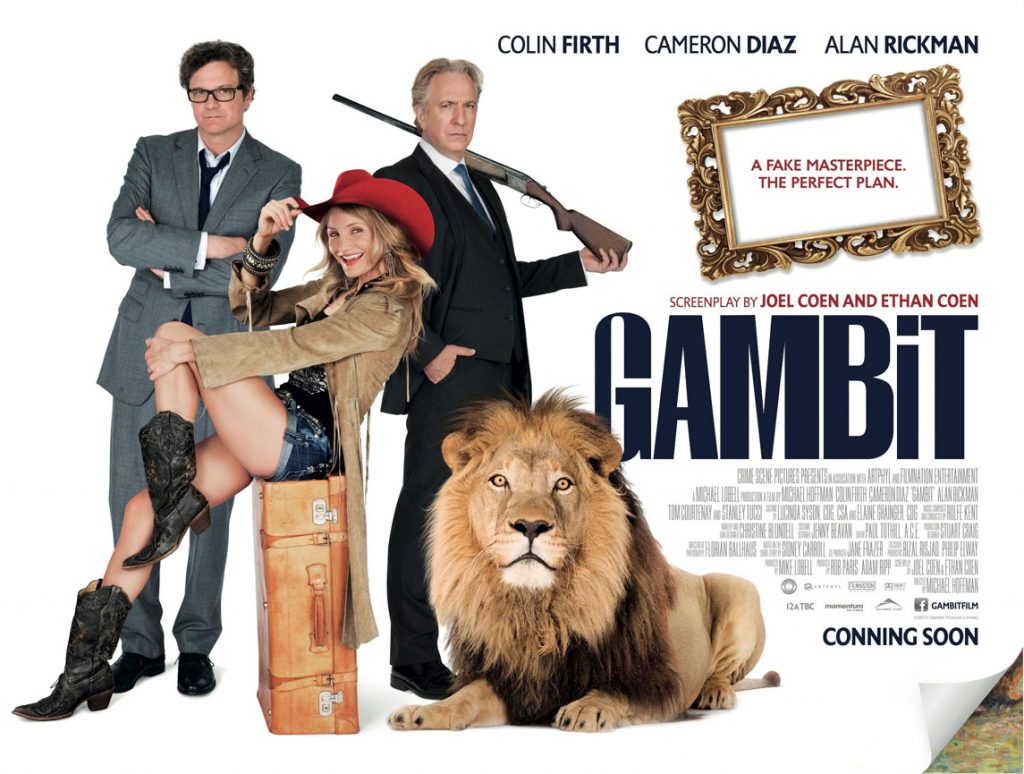 Crime capers are becoming somewhat of a rarity in current cinema, however, the Coen Brothers-scripted remake of 1966 Michael Caine vehicle, Gambit, takes us back to the days of the nostalgic caper. Sticking with the title Gambit, Michael Hoffman‘s film is fun, throwaway entertainment whilst being far from the Coen’s finest moment.

At its strongest moments, Gambit feels like a classic crime caper oozing the nonsensical fun of The Pink Panther films – especially when plans begin to go wrong and things gradually grow chaotic. The Coen’s lace their script with quick dialogue and fun wordplay (delivered impeccably by thesps: Firth, Rickman and Courtenay) and a variety of rather expected twists and turns. One highlight includes a misunderstanding between camp hotel staff and Deane, about the Curator’s little friend, ‘The Major’. Unfortunately, there is something rather dethatched about the screenplay which does not translate well onto the screen – mainly Diaz’s character PJ – the stereotyped Texan who does not gel with the British aesthetic of Hoffman’s film.

Not all of the comic moments work – from PJ’s obscure Texan words of wisdom to Deane crawling along a rooftop in his boxer shorts – all moments intended to be humorous that fall flat. Even an appearance from Stanley Tucci as a heavily-accented German art curator, feels wasted – Tucci is an actor who normally steals every scene he is featured in, but his role in Gambit feels like a bizarre caricature that tries too hard to get laughs. Fortunately there are several glimpses of traditional Coen madness that appear throughout Gambit, including a monkey rodeo and seeing Tom Courtenay in fisticuffs with a huge Texan man.

Colin Firth is completely watchable in the lead role, who makes the transition into comedy rather seamlessly, with Gambit allowing him to take on a more bumbling role than we are accustomed to seeing him in. The actor shines at both physical comedy – making even Deane attempting to move a chair amusing, and verbal humour – most notably through his hate-infused descriptions of his employer, Lionel Shahbandar – played by an obnoxiously charming Alan Rickman.

Unfortunately, whilst Cameron Diaz does play the role well – it just so happens to be a rather annoying role. Diaz is better than this caricatured, cringe-inducing part. Thankfully the wonderful Tom Courtenay is on hand to bring a surprisingly amount of laughs to the role of The Major.

Gambit does prove to be a reasonably enjoyable watch with humour courtesy of Firth, Courtenay and Rickman’s performances – however, fans of The Coens may be left feeling rather disappointed at the so-so, middling nature of the film.