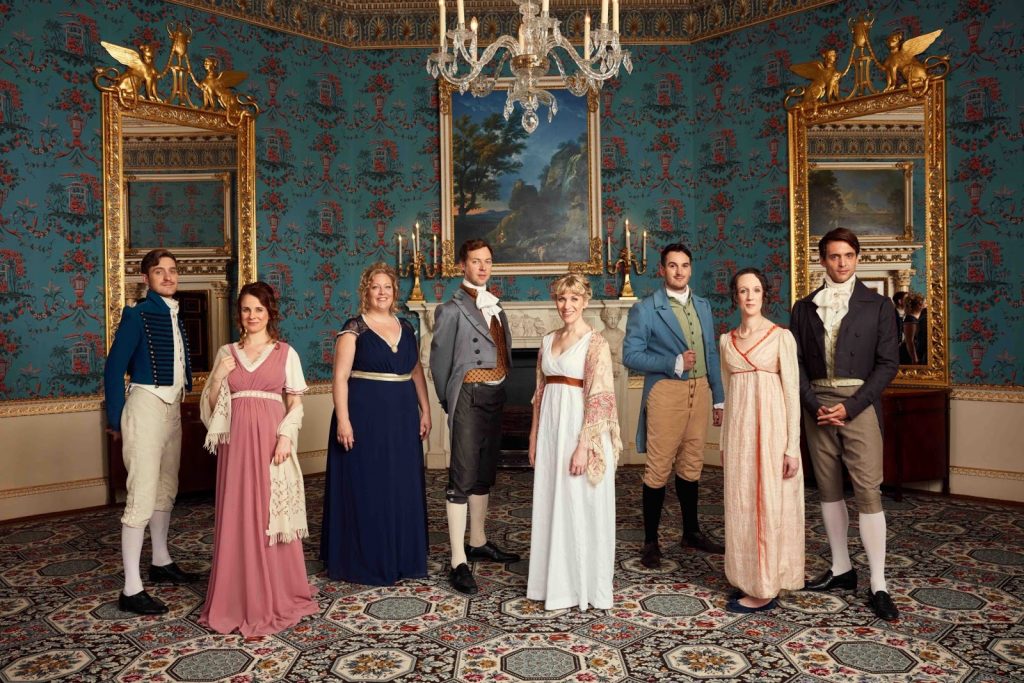 Austentatious has conquered the Edinburgh Festival Fringe, London’s West End and has toured the globe thanks to its blend of improvisational period comedy. In this August 24th performance the cast are tasked with taking audience suggested title ‘Etiquette and Engineering’ and turning it into a Jane Austen inspired comic romp. The results are mixed, but an incredibly game cast ensure this is a pleasurable, undemanding watch.

Taking Austen’s typical themes of class, Tory feminism and religion, Austentatious gleefully subverts these through camp parody in Etiquette and Engineering. We are introduced to a wealthy family fronted by Graham Dickson’s businessman who is at the forefront of the new-fangled oil industry. His two nieces (Rachel Parris and Amy Cooke-Hodgson) complete manual tasks for their Uncle, until they attract the attention of his former business partner (in the form of Joseph Morpurgo). Local Vicar (Daniel Nils Roberts) and his sister (Charlotte Gittins) join the fun, with Dickson’s eligible businessman catching the eye of the Vicar’s sister.

The cast are undeniably masters at the fine art of improvisational comedy with each acting as a cog in impeccably oiled comic machine. Each performer delivers their role with the utmost conviction – so confident in these performances that it is a wonder to believe this is an improvised piece. Launching into the humour from the get-go, the Austentatious cast begin to fire out a number of gags – many of which become recurring throughout the hour long show.

Recurring misgendering of the nieces – their uncle continually referring to them as strapping lads is consistently amusing , whilst the characters lack of understanding of the “oil riggy” is a well pitched comic treat. Yet the danger with many of these gags recurring throughout the show adds a repetitive element – a line which may have been a pleasantly amusing one-liner can be hammered to death by continual overuse throughout.

With a series of hit and miss gags recurring so frequently, and an improvised narrative, Austenatious can feel somewhat shaky, particularly in its middle act. As the narrative shifts to focus on the relationship between the nieces and Morpurgo’s mysterious suitor, the humour and narrative engagement dips with Austenatious suffering from a lag midway through. The final act sees things step up with an amusing “oilfield fire” heightened by responsive piano playing from Dylan Townley who crafts an impressive background atmosphere throughout.

Austentatious shines thanks to the rapid-fire improvisational talents of its cast. Whilst the humour often does hit the spot, some of it feels repetitive and a narrative lag midway through means this is not quite as sharp as it could be.