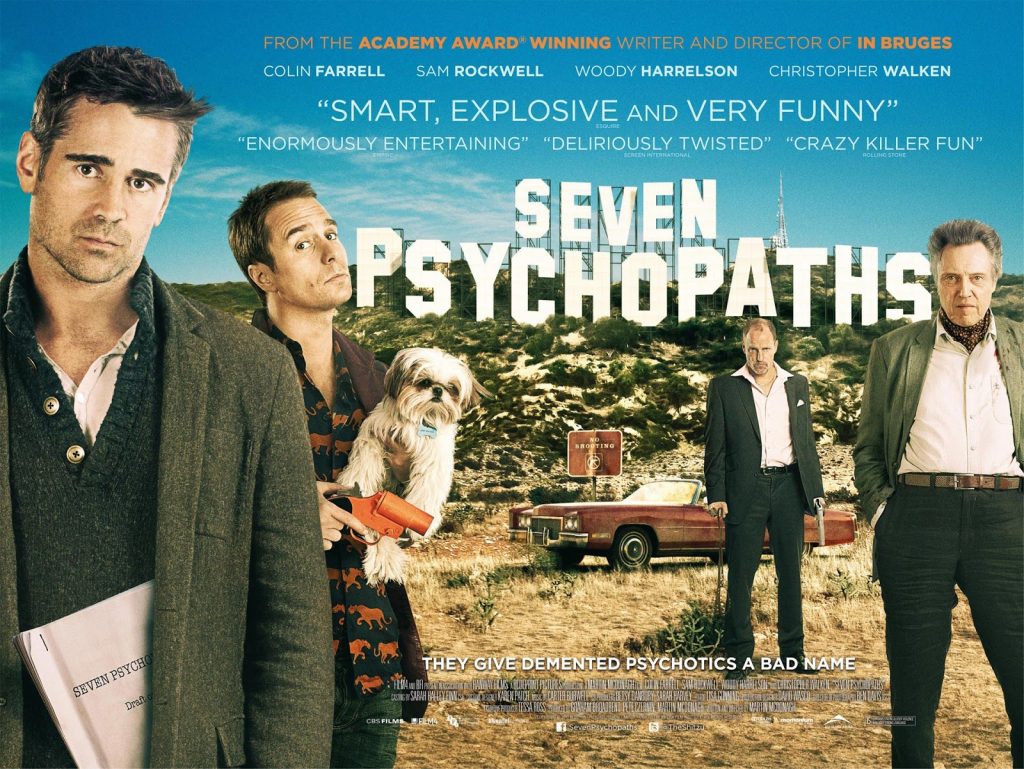 After Martin McDonagh’s stellar, In Bruges, we were excited to see what the director would come up with next. When it was announced that he had re-teamed with leading man Colin Farrell as well as signing a superbly talented supporting cast featuring Christopher Walken, Tom Waits, Woody Harrelson and Sam Rockwell, well, we could not contain our excitement. Unfortunately, Seven Psychopaths comes tumbling down under the weight of these high expectations.

Farrell stars Marty, a struggling screenwriter dragged into the Los Angeles crime world by his inept best friend, Billy (Sam Rockwell). After the pair become wrapped up in a botched dog-kidnapping, they soon have a vicious crime boss (Woody Harrelson) on their tales.

McDonagh’s script cleverly subverts viewer expectations of the action and crime film, by running elements of Marty’s screenplay alongside the film’s narrative. This allows McDonagh to play with the exaggerated staples of the action, crime and comedy genres – this is at its best when Sam Rockwell’s Billy decides he wants to help Marty write the screenplay that ends in an all out guns-blazin’ action spectacular. McDonagh’s script is also packed full of clever one-lines delivered with quick-witted precision from the immensely talented ensemble cast, although sometimes the simple moments shine the most in Seven Psychopaths – like when Christopher Walken’s dog kidnapper character, Hans, refuses to put his hands up at gunpoint (see below).

Despite this clever, self-aware nature of McDonagh’s script, one cannot ignore the hollowness of Seven Psychopaths. It feels as if the film has no narrative charge, simply lagging under the thin plot-dynamic of the central characters trying to escape the gangsters. The narrative takes erratic twists and turns, with viewers never really sure where the film is going or to be blunt, what the point of it actually is. Given that these twists have not had any build-up and randomly take us of course, the overall feel of Seven Psychopaths is messy and uneven. Whilst the inter-cutting of real life and screenplay is an amusing way of playing with genre staples, it cannot help but contribute to this uneven, choppy structure.

Fortunately, rich performances steer Seven Psychopath’s when the the script fails to do so. Colin Farrell continues to prove himself as one of cinema’s most likable and dynamic leading men – bringing his much loved Irish charm to the role of Marty. The character plays on the stereotype of the heavy-drinking Irishman by thrusting him into a world in which he writes about but has no real experience. However, it is Christopher Walken who has us truly drawn to the screen. One review has stated that this rivals Walken’s turn in True Romance, which is high praise – which we are not sure we agree with, but the skill of the actor’s performance should not be undermined. The actor gets a chance to show his comic talents off, turning up his trademark mannerisms (or Walkenisms) to the maximum – just listen out for how he says hallucinogens. Walken packs a subtle emotional punch into the role, as we see him try and cope with the murder of his wife.

The other ensemble turns keep things watchable and exciting, from Sam Rockwell’s manically energetic turn as Billy to Woody Harrelson’s perfect comic timing in the role of dog-loving crime boss, Charlie. When Walken is not around, fellow icon, Tom Waits appears to steal a couple of scenes as a mysterious, rabbit gripping Psychopath – which provides a few laughs.

Whilst Seven Psychopaths never reaches the highs that it seems to think it does, it is perfectly enjoyable, providing us with an alternative commentary on the action-comedy and some terrific ensemble performances.