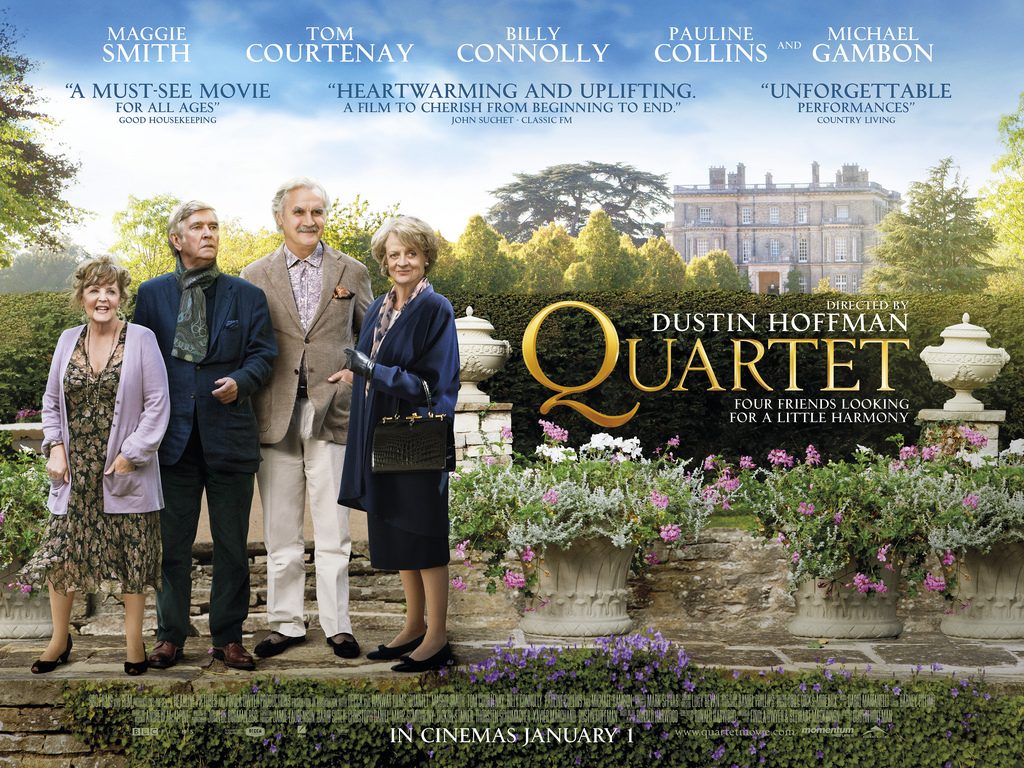 Hoping to catch a similar audience to that of The Best Exotic Marigold Hotel, Dustin Hoffman’s directorial debut, Quartet, presents us with a much loved cast of elderly British thespians doing what they do best.

Set in Beecham House, a home for retired opera singers and musicians, Quartet sees a new arrival re-ignite past tensions and rivalries. These looks set to disrupt the homes’ fundraising gala, leading to the possible closure of Beecham House.

Quartet is a truly charming start to 2013, featuring a gentle mix of comedy, drama and a sincere amount of heart. Despite its setting of a stuffy British manor, Quartet feels fresh – blurring the edges between heartfelt drama and cheeky comedy, with thanks to a likable and stirringly poignant screenplay from Ronald Harwood. The screenwriter crafts a variety of truly eccentric characters that we care for, whilst never feeling manipulatively sentimental or insincere from Pauline Collins’ scatterbrained Cissy to the fragile operatic leading lady, Jean Horton played by Maggie Smith.

Hoffman directs with a sense of delicate intimacy and light comic flourishes, capturing the confusing emotions one may feel throughout old age. Given this softer approach there is a surprising amount of amount of emotional clout in Quartet, mostly seen through the relationship between Tom Courtenay’s heartbroken Reg and former-flame, Jean Horton.

Despite the honest nature of Quartet, the ending brings us some slight disappointments. The narrative of Hoffman’s film boasts of a world renowned operatic quartet (made up of Reg, Cissy, Jean and Billy Connolly as Wilf) and the will they/won’t they of their reunion. Given this, one may expect to see some actual singing, however the ending of Quartet decides to just allude to this, as opposed to letting viewers see the performers on stage reunited – a move which would have been far more satisfying. Therefore, the conclusion of the film feels rather unsubstantial and underwhelming – ending on a whimper as opposed to a high note.

Fortunately, Quartet has so much rich charm and likability that it is easy to overlook the disappointing conclusion. The real heart of the film comes from a divine cast of highly adored stars. Maggie Smith remains a powerhouse performer, an actress who can convey so much in a single glance or a small piece of dialogue, successfully carrying most of the emotional weight of Quartet. Tom Courtenay also excels as heart-broken tenor, Reg, sharing a believable on-screen chemistry with co-star, Smith. Steering the vast majority of the comical moments, are the scene-stealing Billy Connolly and Pauline Collins, both with ability to raise a smile from even the most solemn viewer.

Quartet is not without its flaws, but a warm narrative and intimate direction from Hoffman make these feel truly irrelevant. However, it is the performances of leading players Smith, Courtenay, Connolly and Collins that successfully carry most of the weight of Quartet.