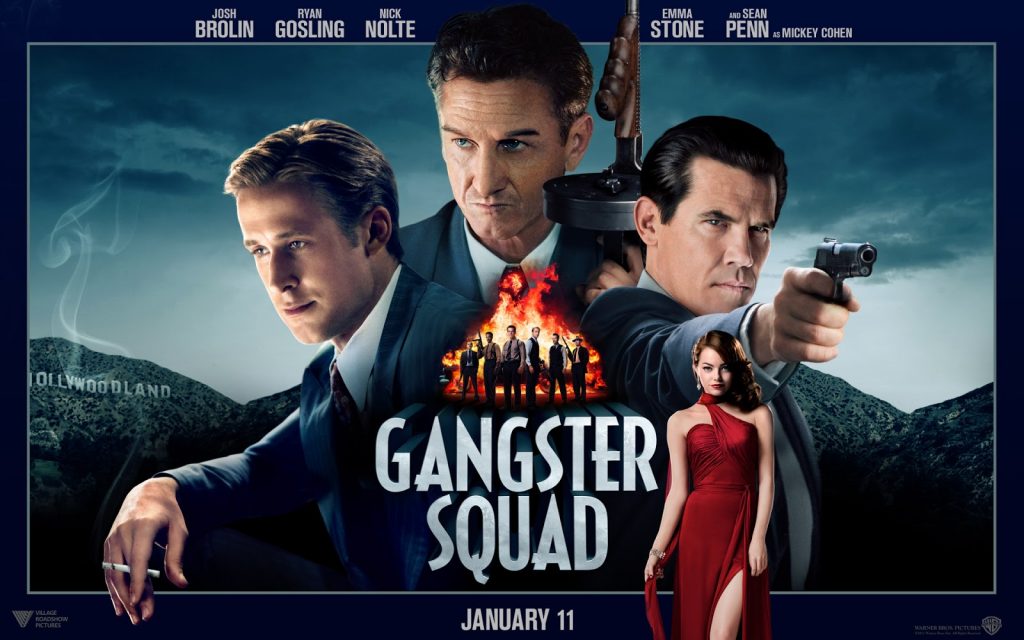 Ruben Fleischer’s Gangster Squad finally makes its way to cinemas after reshoots and a four month delay, but was it worth the wait?

Fleischer’s film is by far a case of style over substance. The director establishes a convincing and rich aesthetic that one would expect from a modern gangster film – from the flickering neon lights on street exteriors to traditional mob-haunts like sumptuous cocktails bars and casinos. Every little period detail down to the classic cars and finely tailored suits, convincingly transports us back to 1940’s Los Angeles. The action sequences are directed with a similarly competent style, giving the film a striking modern twist, which is best seen in a late-night car chase where the “Gangster Squad” intercept a truck filled with Cohen’s heroin and also in the explosive hotel-set conclusion.

Unfortunately, the impressive looking cinema shoot-out, that was seen in early trailers for the film, is absent from the final cut. It is, however, replaced by an action-filled Chinatown set sequence, which feels  disappointingly shoehorned in. Despite several attempts to craft it Will Beall’s screenplay lacks any authentic emotional investment, the narrative simply presents us with various set pieces, all in the name of taking Micky Cohen’s empire down. The well crafted style of Fleischer’s picture also feels undermined by some unconvincing dialogue and bland characterisation, with Gosling and Penn’s characters speaking in lazy forties metaphors.

The Micky Cohen character, feels particularly poorly fleshed out – despite being the most powerful gangster in Western America, the character leaves very little lasting impact with viewers. Despite, Penn’s best efforts to inject life into the character, he ultimately feels like a bland, uninspired stock character. While Brolin’s character may not be the most interesting or charismatic,  he proves to be a capable leading man and carries the film with confidence. It is unfortunate that like Penn, Brolin is unlikely to leave any lasting impact on viewers. The lack of interest in these two central characters, softens the narrative blow of Gangster Squad, as we have little to no investment in either hero or antagonist.

The supporting players fare better, Ryan Gosling has the power to command audience attention, even when he has little to do on-screen apart from smoke and look incredibly debonair. Emma Stone proves to be a charming addition to the cast, yet is given nothing of merit to do, apart from kiss Ryan Gosling – the poor girl.  Veteran stars Nick Nolte and Robert Patrick add some weight to Gangster Squad, through likable supporting turns with Nolte still proving to have a powerful screen-presence.

Gangster Squad may suffer from poor characterisation and uninspired dialogue, but it certainly does prove to be an entertaining watch. Fleischer’s film is visually slick and well crafted, featuring a variety of exciting action sequences and the occasional impressive performance.