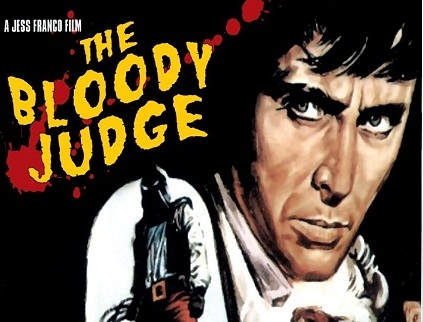 Aficionados of cult seventies horror will be in their element with the newly released cut of Jesus Franco classic, The Bloody Judge. Starring Christopher Lee, Franco’s picture fuses elements of cult favourite Witchfinder General with his traditional lust-filled, blood-soaked style.

The Bloody Judge follows the notorious Judge Jeffreys (Lee), a ruthless pursuer of 17th Century justice, as he carries out witch hunts in his village. However, he soon forms a sinister obsession with local girl Mary (Maria Rohm), which further fuels his spree of brutality and torture.

Whilst the budget may not match the likes of Witchfinder General, The Bloody Judge gives the film a run for its money. Franco carefully establishes the historical context of the period, capturing the war-torn nature of 17th Century Britain and the feuding armies of William of Orange and King James the II. This is perfectly displayed in an action-packed battle sequence, which would feel at home in any classic historical war film. However, chances are Franco fans aren’t turning in for historical context but instead the maestro’s darker talents.

The witch-hunting that goes on in The Bloody Judge, remains somewhat distressing to watch to this day. The opening in particular reflects this – we see an innocent woman burnt at the stake, as a result of Jeffrey’s purge for purity, which will remain hard hitting to modern viewers. The same can be said for the many sleazy torture sequences, boasting a trashy amount of scantily clad beauties.

Christopher Lee is given the opportunity to further show his inimitable screen presence. From his booming vocal power to his cold stares, Lee’s turn as Judge Jeffreys’s dominates the screen and proves to be one of the horror icon’s most underrated (and unfortunately, little-seen performances). Supporting performances from Maria Schell, Maria Rohm and Leo Genn add a fun sense of camp and theatricality to the proceedings – it is in particular, a pleasure to watch Lee’s verbal jousting with British thesp, Genn.

The Bloody Judge is a solid, particularly enjoyable effort from Franco, remaining one of the most entertaining pictures of his career. Christopher Lee presents us with a truly gripping lead performance, that horror fans are likely to appreciate. There is also a well handled blend of history and horror, ensuring that The Bloody Judge feels fresh and original, over forty years since its original release.

The remastered DVD release also presents a variety of special features including a variety of deleted scenes (previously only available in the film’s German cut) and interviews with Lee and Franco.

The Bloody Judge is released by Mediumrare on January 21st, 2013. You can order it from Amazon UK.