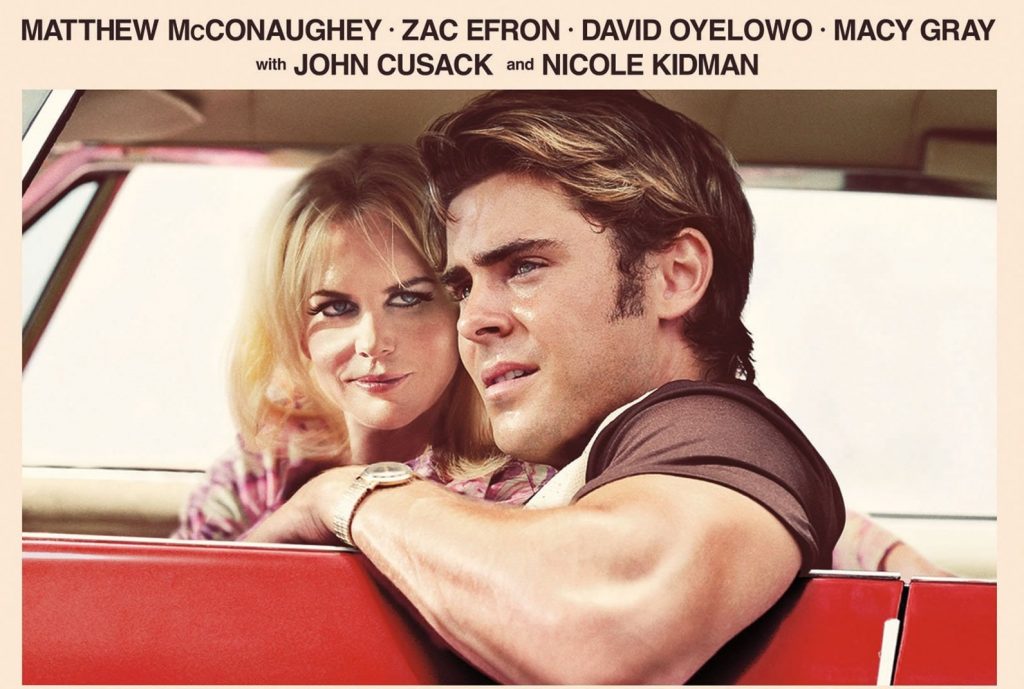 After a rough reception from critics at Cannes in May 2012, The Paperboy finally makes its way to the UK. Even before its general release, The Paperboy has become something of a modern trash classic thanks to director Lee Daniel’s pulpy direction and eye for a scantily-clad Zac Efron.

Fans of the book may feel that Dexter’s narrative structure and character development have suffered through Daniels’ artistic flourishes. Dexter’s novel was a brooding read with a natural narrative structure, something that sometimes feels lacking from Daniels’ adaptation. On occasion, The Paperboy feels like a disjointed, patchwork of loosely connected sequences which is likely to hamper your emotional investment in the narrative and characters. This lack of emotional investment, is not to say that The Paperboy is not enjoyable, it is a lot of fun.

Daniels’ feature is filled with an endearing trashy-charm from the loud aesthetics to the kitsch soundtrack. This charm carries on into the performances too. Nicole Kidman is the clear standout, bringing a large helping of Southern gumption and lashings of trashy sex-appeal to the role of Charlotte Bless. However, there is also an a sense of vulnerability in Kidman’s performance – Charlotte’s blatant over-sexed demeanour works as a means of masking her insecurities, allowing the actress to give one of her strongest performances in recent years.

The role of Jack also allows Zac Efron to shine, with the actor finally being given the opportunity to showcase his talents in a darker, less-family friendly role. Daniel’s voyeuristic gaze of the handsome, lust-filled Jack further thrusts into the sweaty, pulpy atmosphere of The Paperboy. Praise must also go to the wonderful Macy Gray, for a stellar comic turn which also brings themes of 1960s race relations into The Paperboy’s frame.

The Paperboy is a thrilling, sweat soaked Southern-Noir, rich in atmosphere and directorial vision. The varying tone, camp aesthetics and powerful performances from Kidman and Efron completely overshadow any of the narrative inconsistencies. The Paperboy is a must-see.