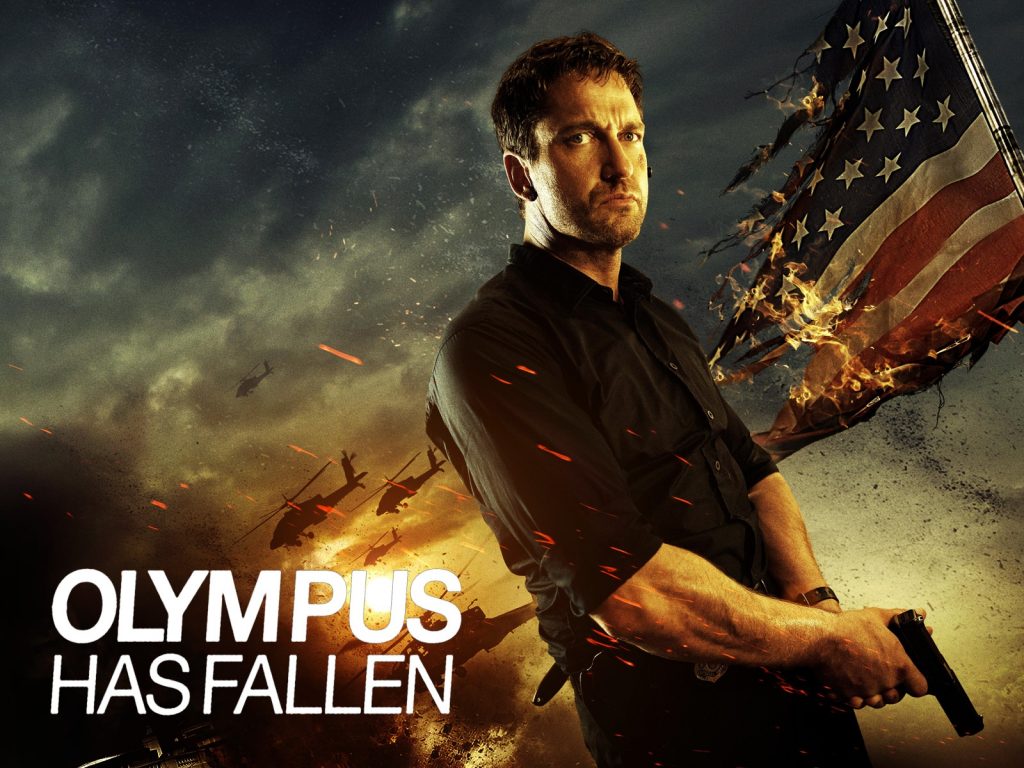 In a refreshing turn of events, Gerard Butler has ditched the romantic comedy in favour of a return to the action film in Olympus Has Fallen. And whilst this return does not present us with anything particularly new, it delivers solid fun and some decent action set pieces.

After the death of the President (Aaron Eckhart)’s wife , former presidential bodyguard, Mike Banning (Gerard Butler) is relocated to a desk job – against his wishes. However, a dramatic turn of events sees him as the only agent left in the White House when the building is infiltrated by a North Korean terrorist group, who hold the President hostage.

Olympus Has Fallen sits somewhere between Die Hard and In The Line Of Fire, despite never reaching the highs of these respective features. That is not to say that Olympus is not fun, because it is. Seeing Butler roam the darkened and decimated structure of the White House, disposing of generic goons makes for an enjoyable watch. Especially when Butler is growling out toe-curling, yet equally hilarious lines such as “I’m gonnae jam ma knife through your skull.” There are some lines that are only suited to Butler’s Scottish twang, and that is one of them.

It is this setting of the White House that makes Olympus slightly more watchable than your average action feature. The rich history of the building is the subject of much fascination and director, Antoine Fuqua embraces this, situating the action everywhere from the Oval Office to secret passages lurking within the iconic building’s walls.

However, the inherent Americana of the symbolic White House also leads to one of the film’s biggest flaws. As a Brit/European watching Olympus, it is hard not to feel cynical towards all the manipulative über-patriotic babble that comes with this territory. The narrative is chock full of slow motion stars and stripes, faux-inspirational speeches about freedom, and references to honour – surely as an attempt at emotionally involving an American audience – but it is clichéd rubbish that detracts from the film’s more successful action scenes.

Butler is a solid leading man and whilst he (fortunately, in this case) does not channel a huge amount of depth, he is a likeable screen-presence who handles the tough hero routine with ease. Banning does not hold back from using extreme measures against his opponents, making Olympus an often brutal and tense watch.

Supporting player, Morgan Freeman brings a welcome sense of gravitas to Olympus as the Speaker of the House forced to step-up to the role of President. Whilst he does not have a huge amount to do, the feature is all the better for his likeable presence. The same can be said for Dylan McDermott, Melissa Leo, Angela Bassett and Robert Forster – all stellar character actors who keep Olympus thoroughly watchable. Aaron Eckhart fares less well as the bland President, who viewers are unlikely to have a great deal of attachment or sympathy too.

Under the heavy veneer of faux-Americana , there is a solid action film lurking in Olympus Has Fallen. Butler is a fitting lead, and watching him deal with the carnage of a decimated White House makes for an enjoyable watch.