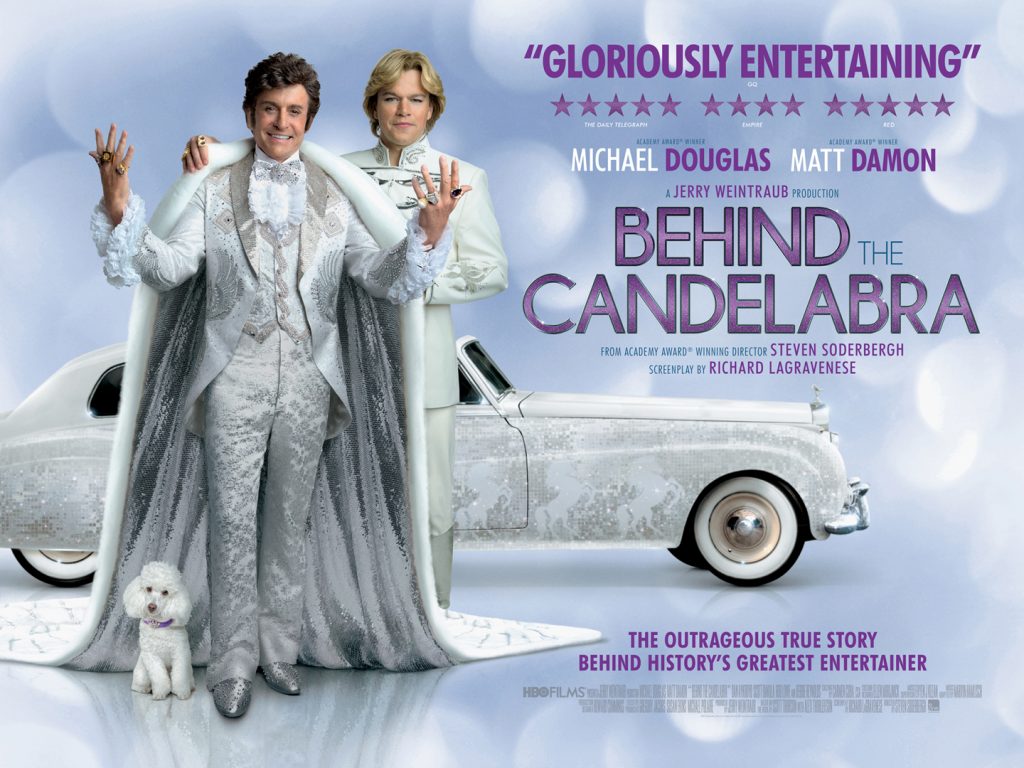 Steven Soderbergh’s Liberace biopic Behind the Candelabra may have struggled to make it onto the big screen in the US, but fortunately British audiences will be treated to the full cinematic experience on the 7th of June.

Soderbergh’s (alleged) final feature details the famed pianist’s (Michael Douglas) relationship with boyfriend Scott Thorson (Matt Damon), amidst his closeted sexuality and height of his celebrity. Richard LaGravenese’s screenplay is adapted from Thorson’s memoir Behind the Candelabra: My Life With Liberace.

Behind the Candelabra sets out to capture the grit behind the rhinestones in what is essentially an old fashioned tale of Hollywood loneliness and despair. LaGravenese takes a simplistic approach structurally with Liberace and Thorson’s romantic encounters, vices, and relationship troubles represented as a series of inherently connected occurrences all respondent upon one another – which results in a traditional HBO style polish. However, Behind the Candelabra is filled with realistic hard-hitting emotion, camp humour, and Hollywood tragedy.

Liberace and Thorson are written with an admirable sense of depth with Soderbergh capturing Liberace as Mr. Showmanship – a vibrant and flamboyant stage personality, whilst subsequently capturing the performer at his most stripped back emotionally and even physically (we see a wigless Liberace throughout). We begin in awe of this rhinestone-clad pianist’s talent, experience his love and subsequent heartbreak for Thorson, and hurt with him in his dying days. Thorson makes an equally fascinating character with LaGravenese focussing on the transformation of the young man’s naivety disappearing amidst narcissism and addiction.

The portrayal of kitsch Hollywood practice in the seventies makes for a hugely entertaining backdrop. This is channelled throughout many of the supporting performances from Dan Akroyd’s turn as Liberace’s penny-pinching agent to Debbie Reynolds as the performer’s lonely, heavily-accented mother. However, it is Rob Lowe’s small appearance as a botoxed plastic surgeon that provides most laughs, truly channeling Liberace’s own words ‘Too much of a good thing is wonderful.’ This Hollywood excess is an ever-present force – appearing in all from Douglas’ costumes to Barbara Munch’s lavish set-decoration.

You would be hard pressed to think of an occasion where either Michael Douglas or Matt Damon have impressed this much. Douglas captures Liberace in every nuance – from his uncanny vocal delivery to his flamboyant mannerisms. The actor manages to tug at the heartstrings in some hard-hitting, emotionally draining dramatic scenes – in particular the film’s heartfelt conclusion. Damon excels as a fish-out-of-water, overwhelmed by the wealth and corruption of Hollywood – whilst continually channeling a slight sense of vulnerability.

Behind the Candelabra is the strongest feature of 2013. Douglas and Damon lead this tale of romance and hurt against a marvelously crafted backdrop of Hollywood kitsch, excess, and isolation.