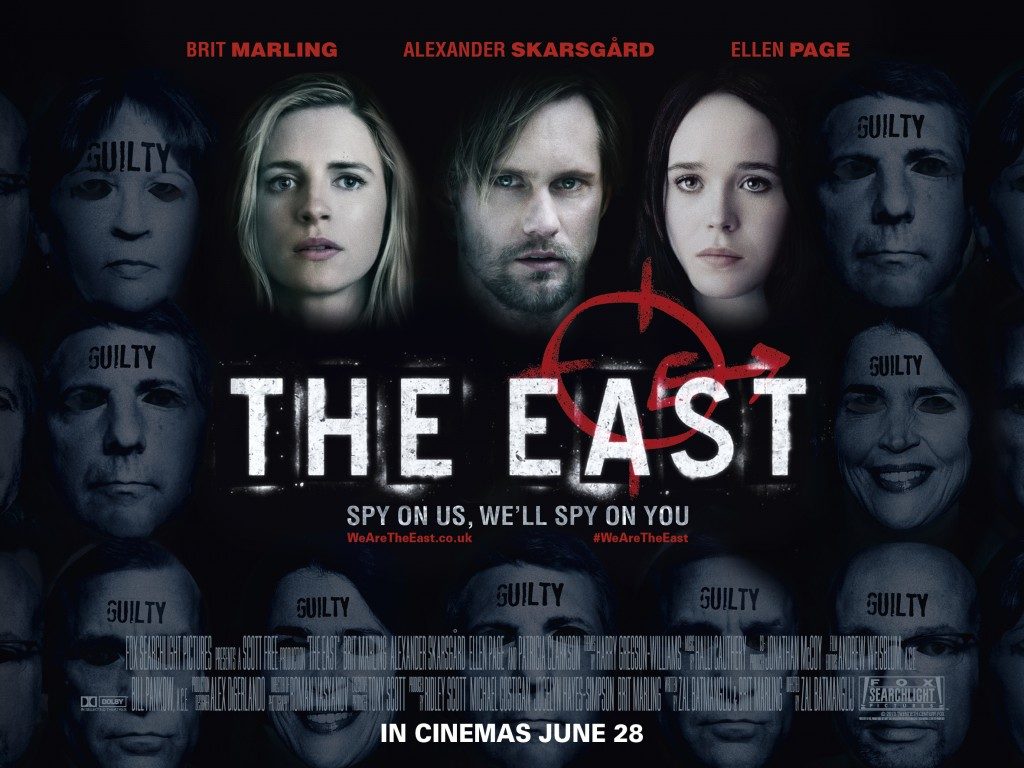 You would think a film like The East that details the work of anarchic environmental activists would make a thrilling watch, but unfortunately Zal Batmanglij’s film squanders its original and simple premise through a series of crippling misfires.

With a screenplay from lead-actress Brit Marling and Batmanglij, The East details an operative (Marling) from an elite intelligence firm infiltrating an anarchist group who are targeting large corporations. However, her allegiances are challenged as she grows closer to this group of eco-terrorists who call themselves The East.

The East opens with a chilling sequence of crude oil pouring through the vents of a CEO’s luxurious home after it’s revealed he disposed of thousands of litres of the stuff in American waters. Batmanglij suggests that this will be a dark, subversive piece that sets out to readdress the balance between corporations and those that their greed hurts. Unfortunately excluding one other set piece (when The East elaborately poison executives with their own deadly painkiller) – we rarely see this happen. Instead Batmanglij’s screenplay focuses on operative Sarah’s growing relationship with the anarchists.

Despite this focus on relationships within The East, we never feel truly intimate or engaged by Sarah or the group. Instead the anarchists feel glazed over caricatures of eco-hipsters – they raid trash cans, feed each other, and jig to folk music, and there is little more to them than that. The screenplay is packed with a variety of inconsistencies like how Sarah could so easily be accepted in a well-established anarchist group or how a corporation could legally sell a drug that damages of the functions of everyone who takes it.

As for the implausible scenes involving the take-down of these corporations, they lack the excitement and drive that this film so sorely needed to kick it up a gear. The pace of Batmanglij’s film remains slow, verging on downright tedious – episodes of ABC’s Revenge showcase far more originality and tension whilst tackling the similar theme of corrupt corporation takedown (fans may remember Emily’s take down of Bill Harmon’s investment firm in the first season). This is particularly disappointing as The East boasts such a fantastic initial premise.

The performances also feel equally uneven with Brit Marling faring the worst. Despite previously shining in Arbitrage, Marling’s performance feels flat here with the actress failing to display the range that this part needs. Sarah’s draw towards The East despite her loyalty to her employers should have showcased an emotional struggle for the character, but Sarah simply seems impartial and unengaged by all of the events that surround her. The equally talented Ellen Page also appears squandered in a role that can simply be described as a whining brat.

On the positive side, both Alexander Skarsgard and Patricia Clarkson are excellent. Skarsgard displays a natural charisma and magnetism, whilst Clarkson packs an icy bite into the role of intelligence honcho Sharon.

Despite initially promising an exciting and subversive concept, The East is simply a flat and tedious look at the lives of unlikeable eco-hipsters that fails to showcase the readdressing of the balance of power between the social classes. It appears greed really is good.

This review was featured on The People’s Movie as part of my EIFF coverage.