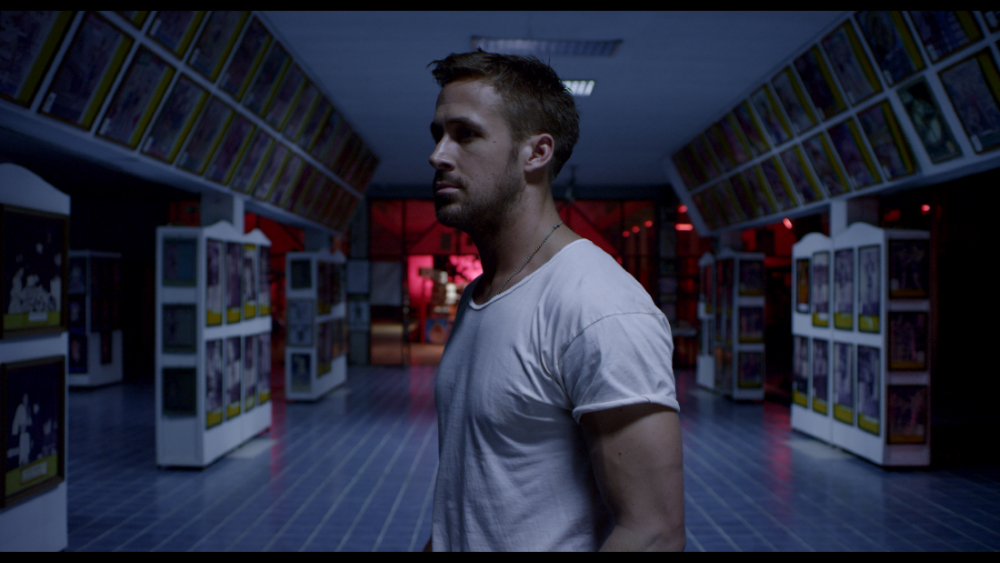 After edging closer to mainstream audiences with his 2011 feature Drive, Danish director Nicolas Winding Refn gives his new-found audience a square kick to the face as he returns to more ambiguous arthouse territory with Only God Forgives.

Whilst Only God Forgives is stylistically reminiscent of Drive – seen through its neon-tinged aesthetic and dark red glows, thematically it feels closer to Refn’s brooding Norse epic, Valhalla Rising. Refn uses limited dialogue, places an emphasis on ambiguous dream-like sequences and further showcases his tendency for ultra-violence. This results in a truly striking combination of electric and mesmerising visuals with a broodingly intense yet mysteriously ambiguous narrative.

It is no surprise to see the director dedicates Only God Forgives to cult-Chilean filmmaker Alejandro Jodorowsky – his influence can be seen throughout the feature – as can the stylings of fellow avant-garde filmmakers David Lynch and Gaspar Noé. Walks down woosy corridors, visions of limbs being hacked off and unsettling karaoke numbers craft a surreal, nervous dreamlike atmosphere – resulting in us never truly anticipating the direction that Refn’s narrative is going to take.

Thematically Refn presents us with a lingering tale of vengeance and skewed justice – where the ‘good guys’ start and the ‘bad guys’ begin is never quite clear. Julian is a quiet type who never truly appears to commit to the vengeance that he seeks – he appears lost, drifting through this surreal hellish Bangkok underworld. Gosling brings a mesmerising intensity to the role of Julian – he showcases echoes of the troubled western hero and presents us with a dangerous unsettled quality.

The title seems most apparent in the character of Chang – the zen-like retired police chief is God – he dishes out the punishments that he sees fit and masterminds some of the most violent moments in the feature – queue one sequence involving spiked needles and ear-drums. Perhaps even more vile than Chang is Crystal, Julian’s velour track-suited, peroxide blonde mother who excuses her eldest son’s crimes (noting ‘well he must have had a reason’). Crystal’s desire for vengeance is showcased through her continual disappointment for Julian who she continually compares to his older brother (with echoes of incest coming through when Crystal even compares her son’s manhood). The usually loveable Scott Thomas is magnificent in this trashy, downright vile role.

Whilst many will be tired by the ambiguous nature of Only God Forgives, others will be mesmerised by Refn’s astounding visual style and poignant, intense, ultra-violent tale of vengeance in the Bangkok underworld.