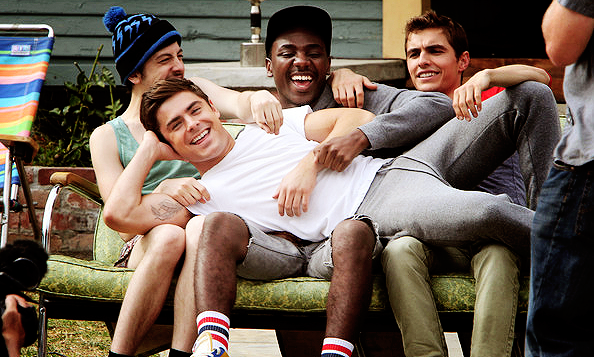 2013 has been a disappointing year for comedies (shall it forever be known as the year that gave us We Are the Millers, The Hangover III and Grown Ups 2?), with only the occasional glimmer of hope from the likes of This Is the End. However, things are set to improve towards the end of the year and at the start of 2014 with the likes of Anchorman 2, Bad Grandpa, and Neighbors on the horizon.

R-Rated comedy, Neighbors (or Neighbours to us Brits) isn’t a feature version of the Aussie soap but a tale of a peaceful middle-class neighborhood that gets terrorised when a group of frat boys move into the area.

With a cast that includes Zac Efron, Seth Rogen, Dave Franco, Rose Byrne, and Lisa Kudrow – it seems there will be no shortage of laughs. There’s also the reassuring presence of director Nicholas Stoller who has previously helmed Forgetting Sarah Marshall and Get Him to the Greek.

Neighbors hits UK cinemas on the 7th of March 2014, followed by a US release on the 9th of May 2014. Check out the trailer below.