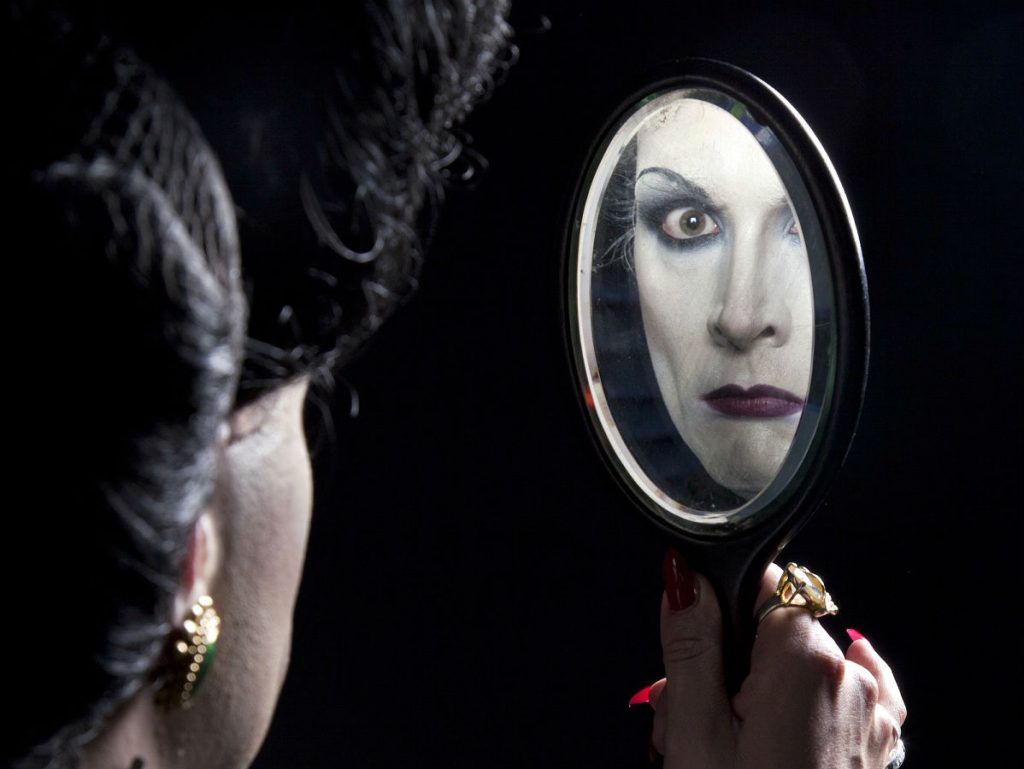 Frau Welt discovers a taste for violence after she discovers her lover has been unfaithful in Berlin. She soon finds the grandeur of the theatre calling her, yet she has not left these dark tendencies behind.

Clements’ Frau Welt is like Rebecca’s Mrs Danvers with a heightened sense of fabulousness. There are lashings of Marianne Faithfull, Marlene Dietrich and Gloria Swanson. We see her defiant control slip into bouts of shrieking hysteria as she casts a judgemental eye over the proceedings and establishes herself as a grand dame of theatricality. This heightened performance paired with a glamorous black gown, Divine-inspired eyebrows, and a shocking powder white face – topped with a black wig. She’s a visually fascinating presence and the perfect anti-hero for this tale of obsessive glamour and fame, betrayal and theatricality.

Frau Welt’s ascension to stardom takes most of the narrative focus and this is told with a macabre sense of humour. Audience members become Welt’s reluctant co-stars as we witness her time in Berlin before she heads to Broadway and experiences a chance encounter with Angela Lansbury. These interactions with the audience are excellent and allow Clements to display a quick-wit and stellar improvisational skill.

Impressive lip-syncs add further high camp to the proceedings, whilst the song choices also add a deeper layer of emotional complexity to the piece. A rendition of Sondheim’s Losing My Mind captures Welt’s horror as she uncovers her lovers’ infidelity, whilst a lip-sync to a Judy Garland number as the narrative proceeds also reveals Welt’s more vulnerable side.

Clements channels every fibre of Welt’s being in what feels like an all consuming performance. Skilfully pitched in a way that portrays Frau Welt as a malevolent grande dame, yet also reveals her vulnerability and humanity – this is an undeniably impressive turn.