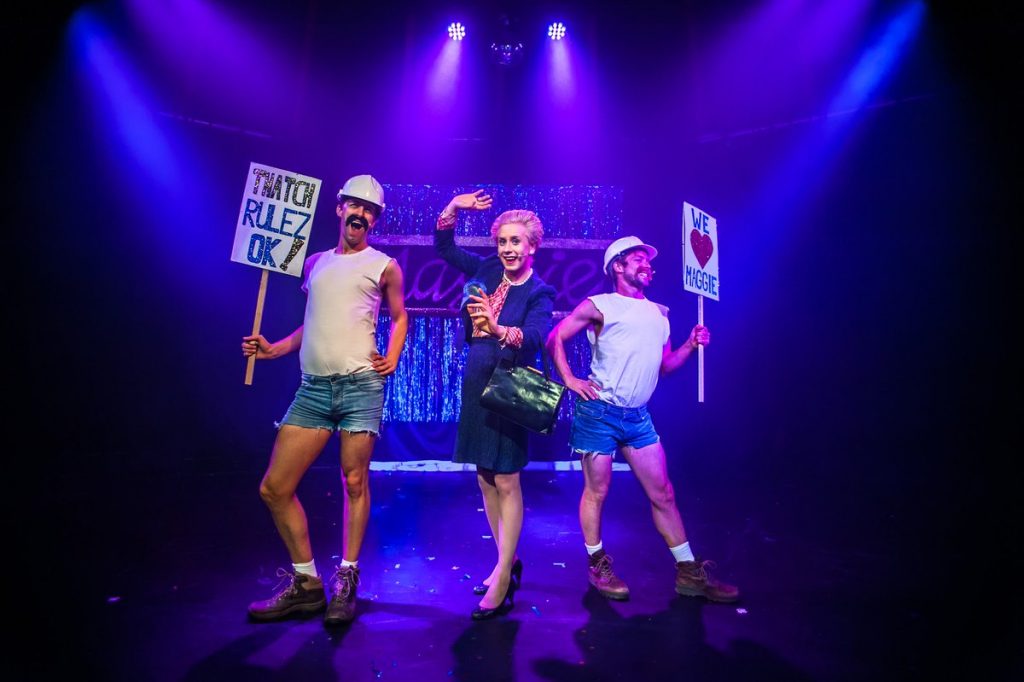 Margaret Thatcher: Queen of Soho returns to the Edinburgh Fringe after four smash runs, this time more prevalent than ever as we approach the thirtieth anniversary of the passing of Section 28 (which banned promotion of homosexual lifestyles in schools). Queen of Soho is the ultimate high camp revision of Thatcher’s legacy filled with biting political humour and fabulous musical numbers – all bound together by Matt Tedford’s savvy performance as The Iron Lady.

The tone is set when Thatcher – complete with handbag, sensible shoes and her dress suit – struts onto stage performing the YMCA with two moustachioed supporting dancers. These dancers will become Maggie’s co-stars as she recounts her journey from Prime Minister to cabaret icon with a sprinkling of musical numbers thrown in and a bucketful of jokes centred on Thatcher’s policy (an early milk snatcher gag particularly tickles) – as well as contemporary politics. Maggie’s thoughts on Brexit and Theresa May make some appearances and add some variety for those that have stuck with the play throughout its five year run.

Whilst Tedford may not be the physical double of Thatcher, he embodies her essence in his speech and mannerisms. Tedford’s Thatcher is painfully controlled like the lady, yet the performer revises history by the turning an incredibly polarising figure from history into a loveable roughish heroine. This revision fixes her questionable political decision, gives her a sense of empathy and compassion, as well as a number of banging disco bops – Tedford’s Thatcher is the first female Prime Minister the United Kingdom deserved.

It’s hard not to get swept up in the pantomime silliness of Queen of Soho from the disco numbers (Last Dance, It’s Raining Men, YMCA) to the booing of Jill Knight (our villain, Maggie tells us), and the over the top turns of Tedford and his supporting performers. Whilst most of the humour is savvy and amusing, some jokes – like a gag involving a portrait of Winston Churchill go on a little too long and miss the mark. Yet these instances are few and far between and things are back on track with some biting improvisation – particularly seen when two people attempt to leave early, with Maggie noting that the full Theresa May fanclub was offended.

Margaret Thatcher: Queen of Soho is a fun-filled riot packed with lashing of fabulous glitz and biting satirical political humour.