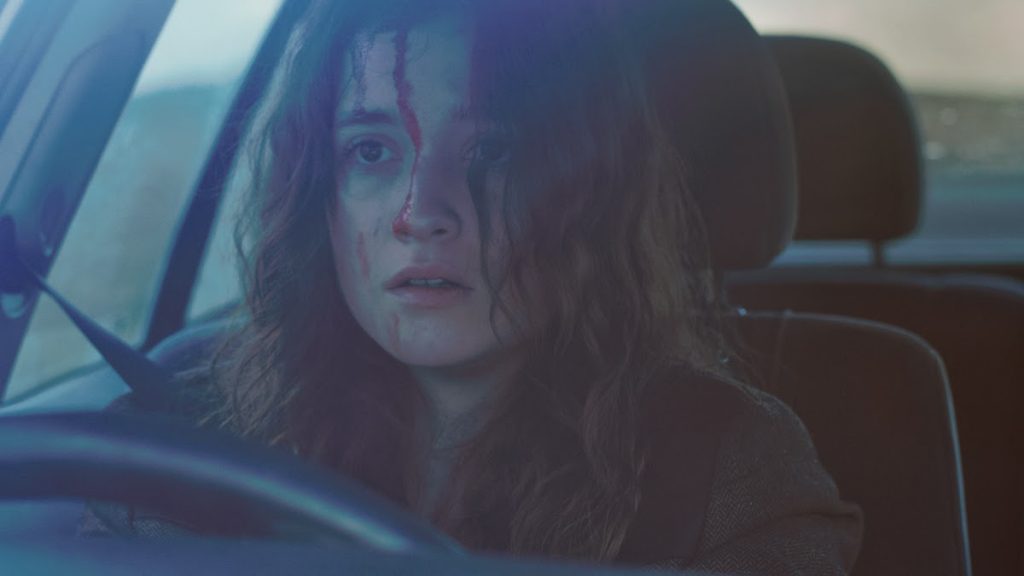 Jeremy Lovering’s upcoming British horror, In Fear, is a simple yet effective little shocker that succeeds by tapping into some familiar, yet nonetheless terrifying fears that we will all surely relate to.

In Fear follows Tom (Ian De Caestecker) and Lucy (Alice Engert), a young couple, driving through rural Ireland on route to an isolated hotel. After being spooked by a run in with some aggressive locals at a small pub, Tom and Lucy find matters quickly becoming more terrifying as night falls and they get lost in the labyrinthine wilderness.

Lovering’s film shines when it is tapping into these primal fears that we have all experienced – whether those are being lost in the darkness, catching strange figures in the corner of our eyes, or simply experiencing the chills of the life-like rural countryside. These fears are all perfectly showcased through Lovering’s directorial style, packed with fast turns round blind corners and quick shots of hazy figures in the distance. This style ensures that viewers are likely to drawn into In Fear, with Lovering literally forcing us into the passenger seat on this tense, brooding drive.

In Fear’s narrative has a strong human focus – it is easy to relate to the primal fears that Tom and Lucy experience, both being well-crafted characters that react just as we would (or like to think we would) if faced with such a situation. This is further helped by two incredibly natural performances from Ian De Caestecker and Alice Englert, both excellent at conveying the sense of paranoia and tension that a horror such as this thrives on.

There are a number of small moments that gradually amp up the haunting sense of voyeurism and paranoia of In Fear. Among these low-key scares: car keys go missing and are replaced, the couples’ clothes appear on the road, and someone attempts to drag Lucy from the car. However, these subtle moments of tension are lost during the film’s final quarter, where things grow ever outlandish and increasingly cliched. Here the simple qualities which were executed so excellently previously, make way for heavy-handed plot twists and a rushed desire to wrap things up.

For the most part, In Fear as a broodingly tense and atmospheric watch, that is sure to tap into some particularly relateable audience fears. However, a chaotic and predictable conclusion ensure that In Fear is unlikely to keep you awake at night.