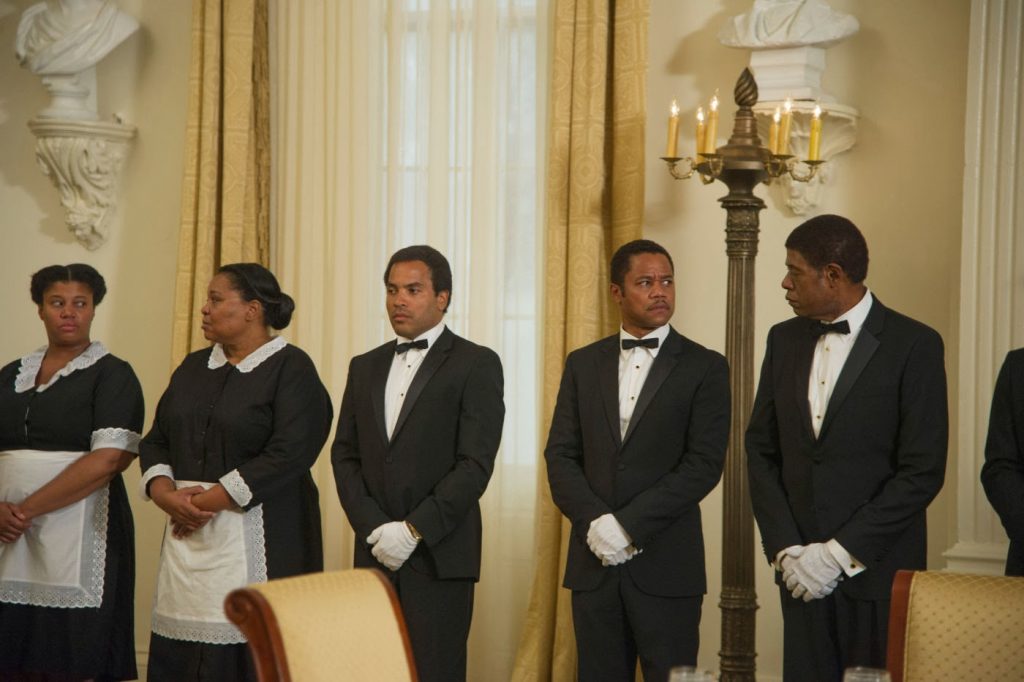 Ever since 2005’s Shadowboxer, Lee Daniels has quickly become one of the most exciting contemporary filmmakers. Both Shadowboxer and The Paperboy’s hard-hitting pulpy trash aesthetics captured the director’s distinctive voice and style. Daniels’ put this style on hold for The Butler, a true story which favours a grand sweeping narrative scaling the entire lifetime of veteran White House Butler, Eugene Allen (who with some creative liberties taken becomes Forrest Whitaker’s Cecil Gaines).

The Butler begins by exploring Cecil’s early life – from growing up on the cottonfields of Georgia to gradually moving up to hotel work. Soon Cecil is spotted by an official who recruits him to work as a Butler within the White House, where he would go on to serve for thirty-four years and under eight presidents. Daniels’ also captures Cecil’s family life with wife, Gloria (Oprah Winfrey) and his turbulent relationship with freedom fighting eldest son, Louis (David Oyelowo), all against the backdrop of racial segregation.

It is no surprise that screenwriter Danny Strong’s narrative can occasionally feel lacking in depth – perhaps a sacrifice that needs to be made when covering a time-span that ranges between the 1920s and 2009. Initial scenes like those of Cecil with his parents (ably played by David Banner and a surprisingly quiet Mariah Carey, both in blink-and-you’ll-miss cameos), ultimately feel so fast-paced that we lack any real emotional involvement. Similarly The Butler also skips Cecil’s time under the Ford and Carter administrations which may have been insightful. Of course a full representation of Cecil’s complete career would have been pushing conventional run-times, but one cannot help but come away thinking that The Butler only skims the surface of numerous iconic historical moments.

Perhaps at the expense of many of these historical moments, The Butler focuses on the human side of Cecil and the juxtaposition between Cecil working for the white man, as opposed to son Louis fighting for civil rights. Whitaker packs Cecil with a quiet restraint and strength, occasionally letting the pain and anguish of years of racial segregation slip through. In a somewhat subversive move, we see a man who breaks down racial barriers through hard-work and gaining the trust and respect of those who may have misjudged him. Daniels does a solid job of conveying the alternative side to this spectrum by following Louis’s work within Fisk University and later briefly within the Black Panthers.

The real highlight of The Butler is watching the truly magnificent ensemble cast at work. It is a real treat seeing the varying relationships Cecil had with each President – from Robin Williams, James Marsden, Liev Schrieber, John Cussack, and Alan Rickman all stepping in as various Commander in Chiefs. Capturing the ever-changing nature of the White House gives The Butler a glossy,  sweeping sense of grandeur – partly paralleled by the film’s A-List cast. Appearances from Lenny Kravitz, Cuba Gooding Jr., Vanessa Redgrave, Alex Pettyfer, Mariah Carey, Terrence Howard, and Jane Fonda top-off the impressive cast.

However, The Butler is truly Whitaker and Winfrey’s film. Winfrey in particular dominates as Cecil’s long-suffering wife, faced with isolation (Cecil spends most of his time working) and the turbulent relationship between her husband and son. However, there is a heartwarming undercurrent that lies behind the character dynamic of Cecil and Gloria, which in its final moments is likely to break your heart (with Daniels’ seeming to save all the emotional weight until the film’s conclusion).

The Butler is sentimental, but never truly emotionally involves as much as you would like it to with the film’s glossy, sweeping style and impressive cast taking centre stage. This is by no means a bad thing as it is one of the most impressive cinematic casts in recent years.