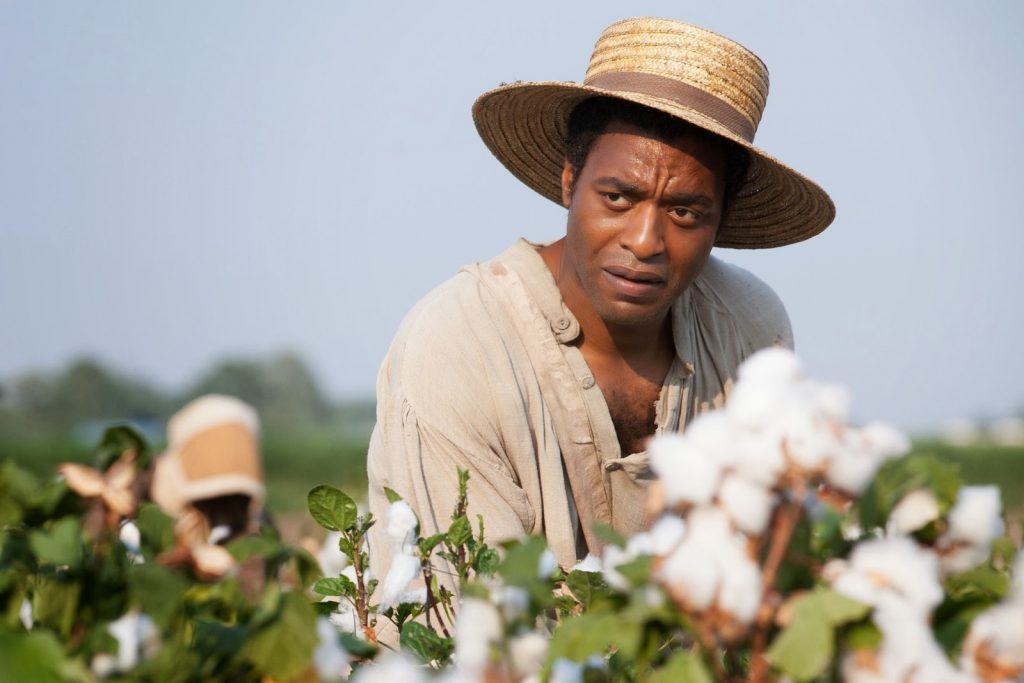 Viewers who experienced Steve McQueen’s Shame or Hunger will know that the director’s films are never an easy nor pleasant watch. In the case of McQueen’s latest, 12 Years a Slave, this is exactly the approach needed to capture the harrowing and all-to-recent horrors of slavery.

Free man, Solomon Northup (Chiwetel Ejiofor), is abducted from his family in New York State and sold into slavery. Northup finds himself at the mercy of brutal slave-owner, Edwin Epps (Michael Fassbender), whilst working in the plantations of New Orleans.

Based on Northup’s 1853 memoir, John Ridley packs his narrative with the true (and often little-seen) horrors of slavery and showcases the soul-crushing effects that this had on those subjected to it. This is a tale that demands to be told, and McQueen’s brutal, unflinching style is exactly how Northup’s strength and fortitude should be shared with us. From the gut-wrenching torture that he endures to moments of slight kindness (as showcased through Benedict Cumberbatch & Brad Pitt’s characters), Northup’s story is one of crushing emotional weight that may lack subtlety, yet undoubted will hit the hearts of viewers with a mighty thud.

McQueen presents the horrors that man is capable of – surely the most gruesome theme of the film. After all this is a terrifyingly recent time in America’s history – it has been just over 150 years since slavery ended, and McQueen has no qualms in reminding us of this. 12 Years is told in such a visceral and brutally modern fashion that does not shy away from vile displays of the cruelty. Told with stirring bloody detail and painful honesty, McQueen presents us with an array of moments where the events on screen often verge on too harrowing to watch (ie. when Solomon is forced by Epps to torture fellow slave, Patsey – a staggeringly powerful Lupita Nyong’o). This is a film that is as vicious and relentless as the horrors that it presents to us.

12 Years is shot was staggeringly beautiful cinematography – the lush green beauty of the New Orleansian swamps and grand architecture of the plantation mansions make a visually absorbing and quietly sinister canvas for this tale to unfold upon. The decadence of these plantation homes marks a stark juxtaposition from the bare dwellings of the slave’s quarters – which are even more striking when compared to Solomon’s impressive New York dwellings.

However, in this harsh cruelty lies a tale of the strength of the human-spirit – with Solomon’s fortitude and perseverance often providing a stirring fight against these horrors. This strength may be chipped away throughout the narrative, but Solomon continues to fight even when weighed down by adversity. Much of this impact is delivered through Ejiofor’s raw and multi-textured performance. The British actor manages to capture the anger and hurt of a people subjected to horrifying displays of cruelty from fellow men in what can only be described as a vile stain in history.

12 Years continues to affect through some outstanding supporting performances. Fassbender delivers perhaps the most ferocious of these, playing Epps with a misplaced-righteousness packed with ravenous anger and lust. Fassbender is like a horrifying force of nature as he barks, tortures, and rapes, the slaves of the plantation – the most excruciating of these aimed at Patsey. Lupita Nyong’o continues to put a human face on the brutality of a time that has since been abandoned in dusty history books. Sarah Paulson, Paul Giamatti, and Paul Dano impress as antagonists who misguidedly add to the sense of cruelty through their normalisation of slavery. However, 12 Years showcases some balance and does not simply condemn the white man, best seen through sympathetic supporting turns from Benedict Cumberbatch and Brad Pitt.

12 Years a Slave is one of the most important historical features in recent years. McQueen presents a bold, unflinching take on one of the most abhorred periods in mankind’s history – putting a stark human face on it and lashing it with a visceral honesty.