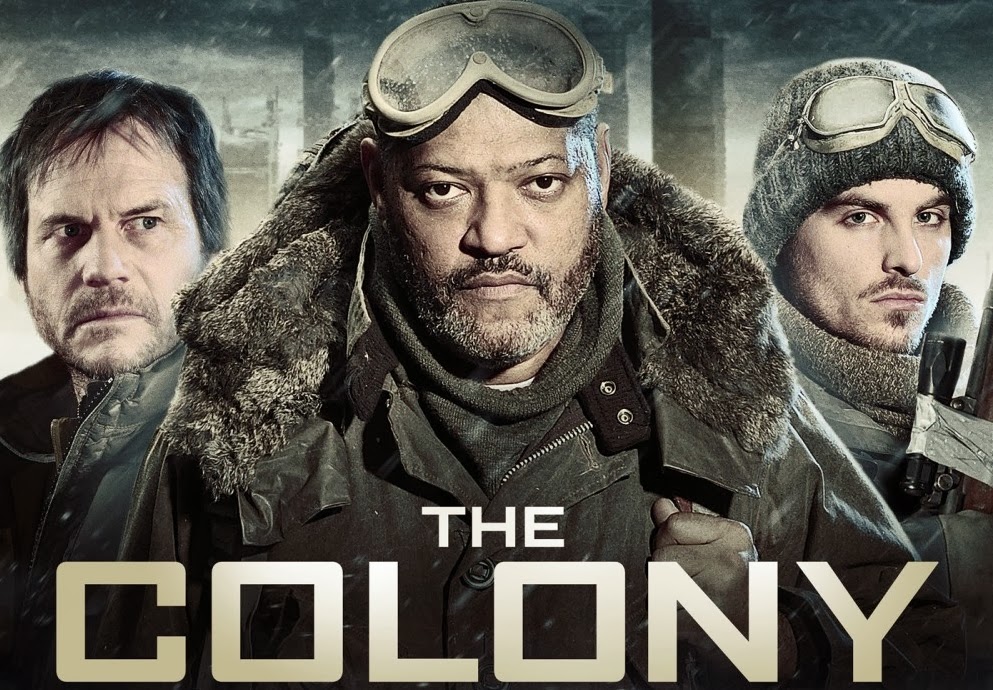 With roles in Hannibal, Predators and the upcoming The Signal, Laurence Fishburne is happily finding a new home within the horror genre – a transition that continues with impressive Canadian feature, The Colony. Fishburne is joined by rising star Kevin Zegers and Hollywood favourite Bill Paxton in this atmospheric chiller from director Jeff Renfroe.

Set in 2045, The Colony takes us to a future where humans have built weather machines to help control global warming. However, after the machines go haywire, the world is plunged into sub-zero temperatures bringing about the next ice age. We find ourselves in bunker, Colony 7, whom after receiving a distress call from a neighboring colony send a team to investigate this threat which drags them into a battle with deadly savages.

Renfroe’s screenplay is an ambitious one, starting as a solid mystery thriller following Fishburne and Zeger’s characters making their way to the distress call. Here we are given a variety of foreboding clues showcasing the direction the narrative is heading, with Renfroe building a palm-sweating tension and ghastly sense of dread. The narrative then turns into a full-bloodied horror-actioner taking us on a deadly race for survival between Colony 7 and a tribe of savages – who have already wiped out the neighboring bunkers. The already original and ambitious global warming-ice-age backdrop makes a fascinating and deeply original canvas for this action-packed chiller to unfold upon.

Paying homage to the likes of Alien and 30 Days of Night, The Colony is packed with a grimy industrial aesthetic which helps enhance the film’s foreboding and unsettling atmosphere. Complete with steaming pipes, dripping mechanical equipment and blood-drenched snow, The Colony fully transports us to this darkened sub-zero world. Part of this world is crafted with CGI-effects which are immediately apparent from the film’s onset, but are undeniably impressive for a picture that has a modest budget of $16m (CAN) – remaining convincing enough throughout to keep viewers absorbed in The Colony. However, some of the savage/zombie make-up does leave a little to be desired.

Renfroe is a clear professional when it comes to the film’s multitude of slick action scenes. Standouts see Zegers and Fishburne battle their gore-hungry foes on a crumbling bridge, and later the inhabitants of Colony 7 chased through the bunker’s ventilation shafts. These are handled with an expert sense of tension and fast-paced vigour, serving as strong set-pieces for the modestly budgeted flick. In a welcome turn of events we even get to see Fishburne dive into a variety of these action scenes (something we do not tend to see enough of in his time in the genre) with the Hollywood star making a convincing action star.

However, it is Zegers who leads the film as the strong-minded Sam – a potential leader for the colony. The handsome Transamerica star makes for a charismatic leading man delivering both the heart and action-chops for a role in a genre feature like this. Completing the cast is the excellent Bill Paxton who does not have a huge amount to do until the film’s final act where he comes into his own. Paxton stars as a leader within Colony 7 whose hard-cut views and no-bullshit policy make him a questionable figure within the bunker. However, Paxton clearly has some fun with the more villainous role and dominates the screen when he appears.

The Colony is a chillingly atmospheric slice of horror-sci-fi that delivers as much thrills and excitement as it does originality and ambition. Fast-paced set-pieces and a talented cast help make this one of the most enjoyable direct-to-DVD flicks in a long time.

You can buy The Colony from Amazon UK.