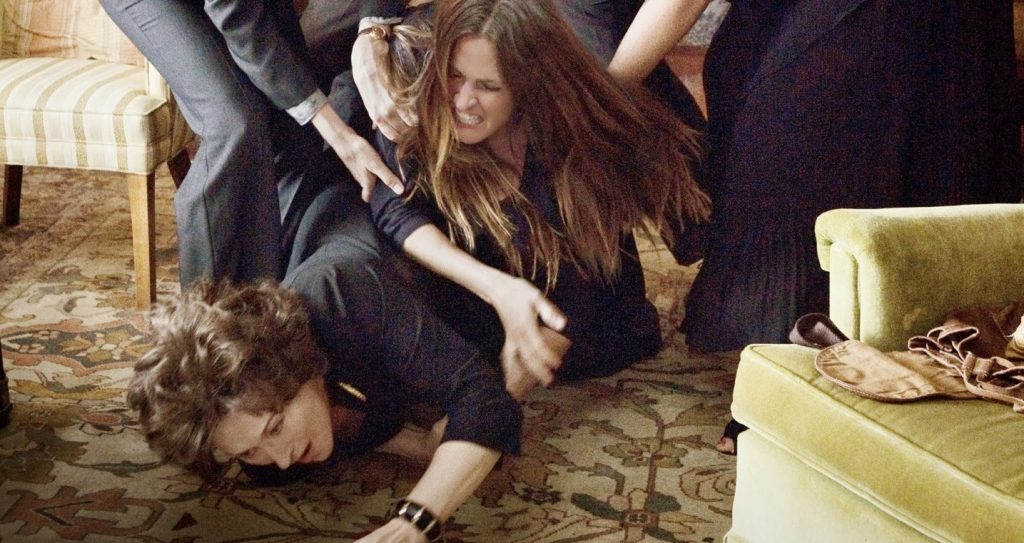 August: Osage County has been described as Oscar bait on numerous occasions. After all, it has a distinguished cast of a certain age – each with plenty of moments to showcase their acting chops, the large dysfunctional family dynamic, and a polished melodramatic sense of theatricality. However, thanks to Tracy Letts’ sharp take-no-prisoners writing style and an array of thoroughly impressive performances (Oscar bait or not), Osage County should not be dismissed so abruptly.

Based on Letts’ play, John Wells (The Company Men) directs this tale of a dysfunctional Southern family gathered for the funeral of suicidal patriarch, Beverly Weston (Sam Shepard). Now leading the clan is acid-tongued, pill popping matriarch, Violet (Meryl Streep) – who bring old tensions to the forefront and ignites old rifts between her three daughters and their families.

Primarily Osage County serves as a showcase for the dramatic talents of Streep, Julia Roberts, and the film’s large ensemble cast. Letts’ captures a bleak sense of tragedy which spawns many a profound melodramatic moment, as well as several scenes of uncomfortable humour. These melodramatic moments showcase Osage County as a stirring slice of Southern Gothic – with grotesque character and a dusty, sweaty, atmosphere driving Wells’ feature. The occasional brashness of these melodramatic scenes may help Osage County establish a status as a camp classic – with over-the-top moments like Roberts barking “Eat your fish, bitch!” to her sister, serving as Osage County’s very own “No wire hangers ever!” moment.

Dominating the film is Streep’s “truth-telling” matriarch, a character that verges on so grotesque that she makes Bette Davis’s Baby Jane look like an angel. Streep is a dream to watch in the role, spitting out Letts’s sharp dialogue with a waspy delight. When Violet speaks the family listen, with Streep having the same effect on the audience as she snarls out lines like: “I thought we were having a funeral dinner not a cockfight.” However, there is also something truly raw and difficult to watch about Streep’s performance – at points immensely vulnerable – as best scene in the film’s conclusion where a wig-less Violet breaks down in a fit of mental exhaustion.

Whilst it could be seen as over-polished and screaming to be noticed by the Academy, August: Osage County redeems itself through stirring writing, a rich Southern Gothic atmosphere, and a true tour de force from the daring Streep.