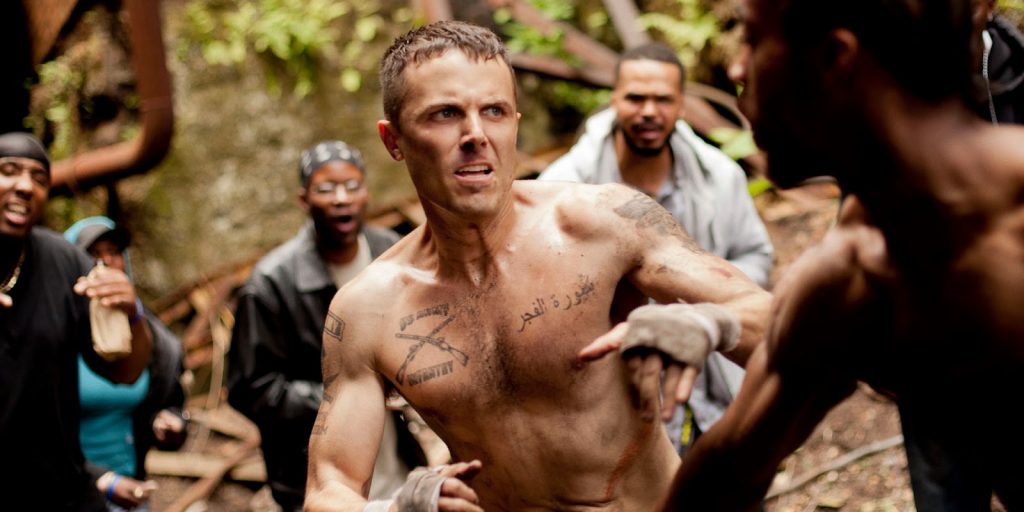 Out of the Furnace is director Scott Cooper’s first film since his award-winning 2009 feature Crazy Heart. Here Cooper has teamed up with producers Ridley Scott and Leonardo DiCaprio and stars Christian Bale and Casey Affleck for this hit-and-miss tale of working class brothers in Pennsylvania steel country.

Russell Base (Bale) makes an honest living as a blue-collar worker in a small town steel mill. His younger brother Rodney (Affleck) struggles to find his feet after returning from the army overseas and eventually steps into the world of organised fighting. A run in with Jersey criminal Harlan DeGroat (Woody Harrelson) results in Rodney’s disappearance leaving Russell to investigate his brother’s fate.

Cooper presents us with a starkly realistic portrayal at blue-collar America, capturing what feels like an authentic depiction of life in the working class steel towns of the country. This is presented with a bleak, yet strikingly beautiful cinematography from Masanobu Takayanagi who has the sheer talent to make anything from a rundown mill to the Pennsylvania wilderness look staggeringly atmospheric. Key visual standouts see a raid on DeGroat’s derelict shack and a sequence which sees Russell and his Uncle (Sam Shepard) stalking a deer in the wilderness.

Out of the Furnace becomes problematic when you take its leaden narrative into account. Whilst Cooper’s film is beautifully shot the screenplay suffers from slow-pacing and a lack of any real narrative focus. There are interesting elements (as noted below), but throughout there is a real struggle to connect with the over-melodramatic story that Cooper tells us – which is one likely to leave many viewers somewhat apathetic in the long run.

When you strip the film down it is essentially just a macho display of revenge and violence atop of even more violence. Fortunately Cooper shoots this with such visceral force that the violence is always affecting and continuously brutal as showcased in the film’s impressively shot bare-knuckle fight sequences. These scenes and Affleck’s character in particular serve as an intriguing Deer Hunter-like glimpse into post-war trauma faced by veterans and their struggle to adapt back into home life – seen when a frantic Rodney screams: “I give my life for this country, what’s it fucking done for me?” However, this study rarely delves any deeper than surface level with Cooper going for visceral shock tactics over character depth.

Fortunately some pitch-perfect performances ensure that Out of the Furnace is continually watchable. A surprisingly stoic and restrained turn from Bale is the driving force behind Cooper’s feature. Affleck delivers a wild eyed energy and vigour to the proceedings, whilst Harrelson does a sterling job at being utterly deplorable as a hillbilly druglord. My personal favourites, Sam Shepard and Willem Dafoe also add a rich amount of energy and character to the proceedings. Zoe Saldana crops up in an unnecessary over-melodramatic romantic subplot featuring Forest Whitaker which serves as a waste of both of their talents.

Whilst there is a lot to admire about Out of the Furnace – mainly its performances and cinematography, its leaden, excessively melodramatic narrative is unlikely to deeply connect with audiences in the same manner that the exceptional Crazy Heart did.


Review written by me for The People’s Movies.