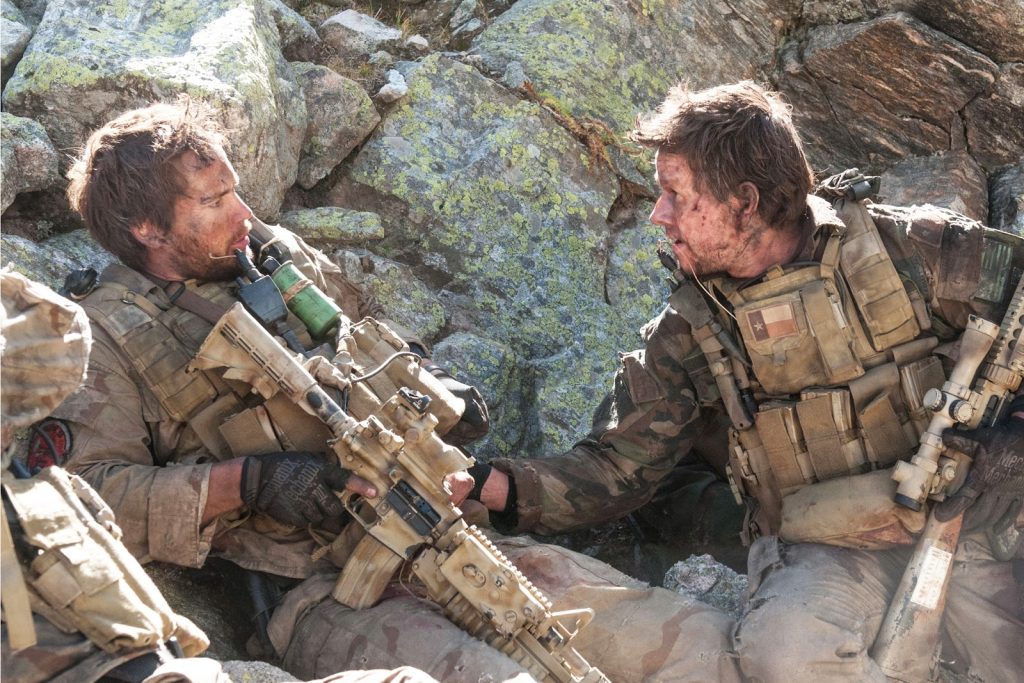 After the poorly received (yet unabashedly fun) Battleship, Peter Berg launches his return to form with blistering testosterone-fuelled military survival story, Lone Survivor. Having already conquered the US box office, Berg’s film has set its target on the UK , hitting British cinemas this Friday – but is it any good? The simple answer is yes, yes it is.

Based on Navy SEAL Marcus Luttrell’s own memoirs, Lone Survivor tells the true story of failed military mission, Operation Red Wings. This sees Seal Team 10 tasked with killing Afghan Taliban leader, Ahmad Shah, but when their cover is blown the mission turns into a deadly race for survival.

Berg is faced with a difficult task of capturing the horrors of modern warfare, whilst also trying to engage audiences with a gung-ho action movie. This is something he appears to handle with ease – telling an incredibly human story that also captures conditions in Afghanistan and the brotherhood of the armed forces, but doing so in an edge of your seat fashion.

Berg’s screenplay places an emphasis on the brotherhood of SEAL Team 10 spending the opening act establishing a sense of camaraderie and kinship which later makes the film’s brutal action scenes so tense and unnerving. This is heightened through exceptional turns from Mark Wahlberg, Taylor Kitsch, Emile Hirsch and Ben Foster, each utterly convicting in both the physical and emotional sides to their roles.

Berg has a lot of interesting elements to play with such as capturing the moral dilemma of whether the SEALs should compromise their own safety and ruin their operation for the lives of Afghan villagers that blow their cover. Here we see tenuous relations between the Afghan people and the Armed Forces, something which is given a multi-faceted exploration when Wahlberg’s Luttrell is taken in and nursed by Afghan villagers. This allows Berg to captures the human face behind war, whether Afghan or American.

However, Lone Survivor essentially boils down to a race for survival and Berg presents this with the frantic and relentless energy that such a race would merit. From the moment that Seal Team 10’s cover is compromised, Berg ramps up the film’s tension to extreme levels. This soon leads to escapes through dangerous mountainous terrains (there is many a bone-crunching fall off a summit) shot with a visceral blistering energy. The film’s latter half sees Berg launch an unstoppable tirade of action that rarely stops to give viewers a moment of breath. The gory details are presented to us in all their gruesome glory from blood-spurting wounds to bone-busting injuries from the harsh landscape. This is gung-ho action at its most brutal and ultimately most mentally exhausting. In the rare moments of quietness, Berg gives us the opportunity to take in stunning cinematography from Tobias Schliessler capturing the rough terrains and stark beauty of the Afghan wilderness.

As is always a risk with this sort of war film, Lone Survivor could be read as a grossly-patriotic affair that attempts to coax viewers into the armed forces. However, I would argue that Lone Survivor is no more an advert for the US Military than the likes of Call of Duty – and if this brutal unrelenting picture still makes you want to join the armed forces then maybe it is for you. Fortunately, unlike Battleship, Lone Survivor avoids the trappings of faux-patriotism like the slow motion stars and stripes etc. simply showcasing the power of brotherhood, rather than that of patriotism.

Lone Survivor is a truly thrilling watch that promises unrelenting visceral action and edge of your seat tension. However, Berg delivers more than you might expect from a genre film like this, packing Lone Survivor with a powerful sense of brotherhood and humanity that is sure to have you emotionally invested.