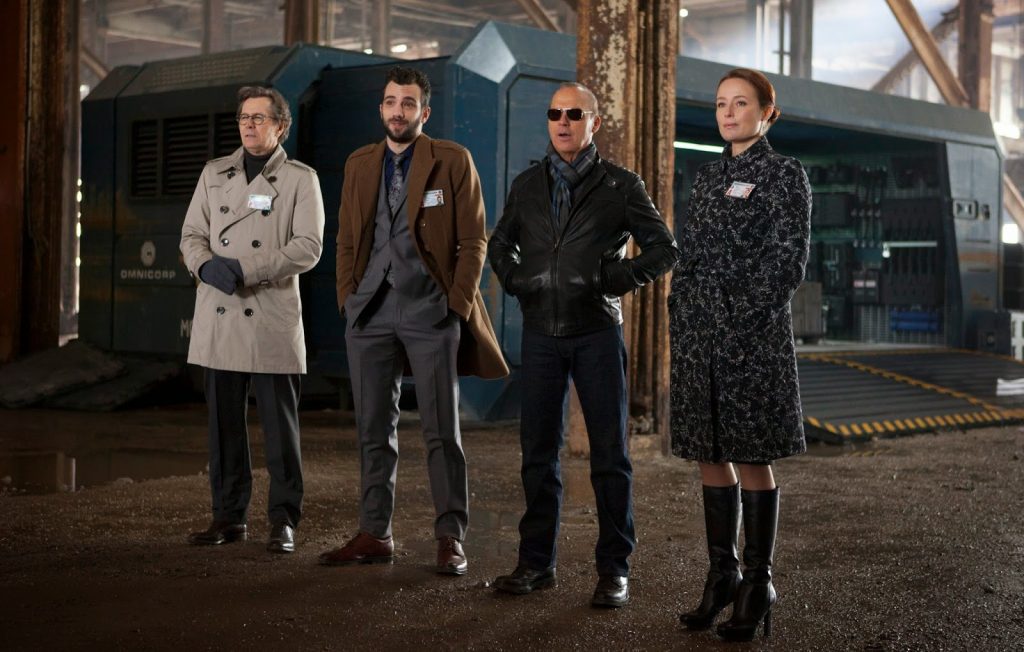 There was a slight glimmer of hope when it was announced that Brazilian director Jose Padilha (the man behind the acclaimed Elite Force) was helming MGM’s remake of 1987 sci-fi actioner RoboCop. Far from a conventional choice, it seemed that there was an aura of freshness about this project that would separate 2014’s RoboCop from the bland remake wasteland inhabited by the likes of Len Wiseman’s Total Recall. However back in 2012 it emerged that Padilha felt his vision was inhibited by constant studio intervention – describing working on the project as hell.

Fast forward two years and RoboCop is finally hitting cinemas where with much relief, the film is not the disaster it could have been but ultimately fails to deliver anything more than serviceable entertainment.

Joel Kinnaman takes the central role of Detective Alex Murphy of the Detroit Police Department, who after being targeted by a criminal’s car bomb, is saved by ominously powerful robo-corporation OmniCorp, who transform him into a hybrid human-cyborg dubbed RoboCop. With the tactical skills of a machine and the conscience of a human, RoboCop transforms the world of policing and ultimately uncovers corruption closer to his new home.

This is ultimately RoboCop for the 21st Century – glossy and slightly more dumbed-down with an emphasis on fast-paced action. Lacking in the madcap industrial ultra-violence of Paul Verhoeven’s 1987 feature, Padilha’s version is blandly stylish and slickly produced, with the action suitably handled yet never particularly exciting – perhaps something that is surprising to those familiar with the director’s brutal take on Brazilian law enforcement in the Elite Force films (or not so much when you read the director’s issues about studio involvement).

The set pieces are admirably handled (albeit the kind that are commonplace in today’s action films) from warehouse shoot-outs to high-speed bike chases – all suitable for switched-off Friday night viewing. More interestingly an opening in war-torn Tehran adds slight glimpses of substance, raising questions about artificial intelligence-driven technology’s place in conflict and the moral issues that this imposes. Impressing more so than the action is Padilha’s glimpse into the dubious ethics in corporate influence on Government, as best showcased through substantially impressive turns from the film’s strongest assets, Michael Keaton and Gary Oldman. The sparring between Keaton’s greed-driven head of Omnicorp and Oldman’s ethical scientist makes for an intriguing subplot.

The grossly satirical tone of the original feature is still present, and handled in typical sledgehammer fashion in the form of Samuel L. Jackson’s right-wing talk show host, Pat Novak. Jackson adds some welcome moments of humour and personality to RoboCop – as does Jay Baruchel’s underused OmniCorp marketing exec. In equal measure with the humour, we are presented with a contrived ‘human’ subplot concerning Murphy’s relationship with his wife (Abbie Cornish) and child – discussing the Detective’s struggle to live with both his human and robotic characteristics – something that loses interest early on.

RoboCop is glossy and undeniably entertaining – providing you don’t overthink it. The action is serviceable and the satire packs the subtlety of a sledgehammer but is engaging nonetheless. Welcome return to forms from Michael Keaton and Gary Oldman lead the strong ensemble cast and chock the feature with personality. However, one cannot help but think it would have all been more interesting to see the RoboCop that Padilha really wanted to make.