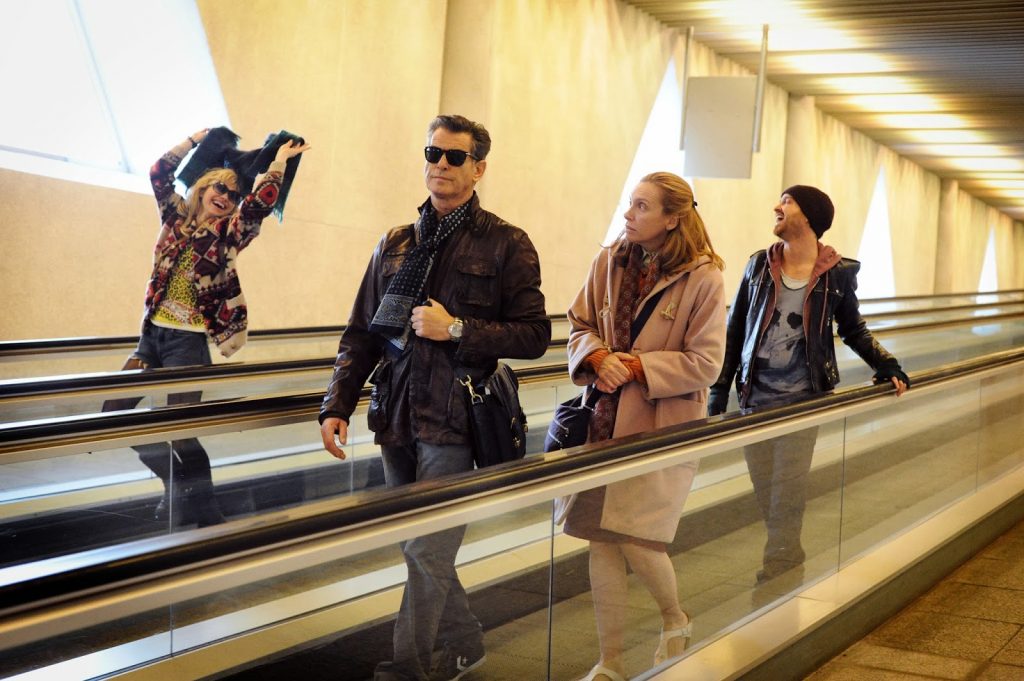 Considering this is a film about people on the verge of suicide, its peculiarly light-hearted, fluffy stuff – perhaps this would be less surprising had the novel been penned by Nicholas Sparks and not Nick Hornby. Directed by French filmmaker Pascal Chaumeil (Heartbreaker), A Long Way Down has its moments of enjoyable entertainment but is ultimately a flawed piece of work.

Opening on New Year’s Eve, A Long Way Down introduces us to disgraced TV presenter Martin (Pierce Brosnan), Jess (Imogen Poots) – an MP’s rebellious daughter, tormented rocker JJ (Aaron Paul), and Maureen (Toni Collette), who cares for her severely disabled son – all who coincidentally meet on a rooftop with the intention of ending their lives. They are drawn together by their predicament and form an unlikely family-like support group after deciding to reassess their suicide plans on the next most depressing holiday, Valentine’s Day.

A Long Way Down is certainly one of these stories that would work better as a book – its narrative trajectory is so bizarre and unbelievable that it does not comprehensively translate to the screen. This unlikely suicide group decide to become a bizarre ‘family’, sell their story to the press, and go on a fun group holiday to Tenerife (think Carry On Abroad if they all wanted to top themselves). The opening scenes on the rooftop are a promising examination of how anyone can be affected by suicide, but this premise is quickly squandered for light-comedy and gushing faux-sentimentality.

Nothing drastic changes between New Year’s Eve and Valentine Day – but we are supposed to believe that these characters have suddenly transformed and are no longer suicidal thanks to their shared experiences. Martin is still unemployed (albeit his daughter is with him), Jess is still the daughter of an MP, JJ is unemployed (but in a relationship), and Maureen still has to care for her disabled son. Perhaps they are a smidgen better off now, but these character transitions are not fully explored for us to be convinced by them. Perhaps the main issue is that A Long Way Down is not really saying anything particularly meaningful or profound – and ultimately serves no real purpose.

Fortunately a strong cast inject some life into these character stereotypes. Brosnan leads the film with a smarmy charm as former daytime TV presenter Martin – a troublingly relevant character who was jailed for sleeping with a 15-year old (“she looked 25″). Yet Brosnan is an undeniably likeable presence and this marks a welcome return to the screen for him. Toni Collette is the emotional heart of the film as the vulnerable Maureen who is worn down serving as a carer for her son. Aaron Paul delivers as the tormented wannabe rock star, whilst Imogen Poots’ over-confident quirky Brit girl act is finally starting to wear-thin and grate here.

A Long Way Down is always watchable and has a few entertaining moments – mainly one where Martin returns to breakfast television to be grilled by his former co-host (in the form of Brosnan’s former Bond co-star, Rosamund Pike), who brings a wonderful false-charm and soullessness to the feature. Perhaps a dig at the world of breakfast TV?

Chaumeil’s film is always watchable but one that is unlikely to connect with audiences. It does not appear to be saying anything of value, instead serving as a light, unsubstantial comedy about four oddballs. This is ultimately going to be found a long way down, at the bottom of a bargain bin.