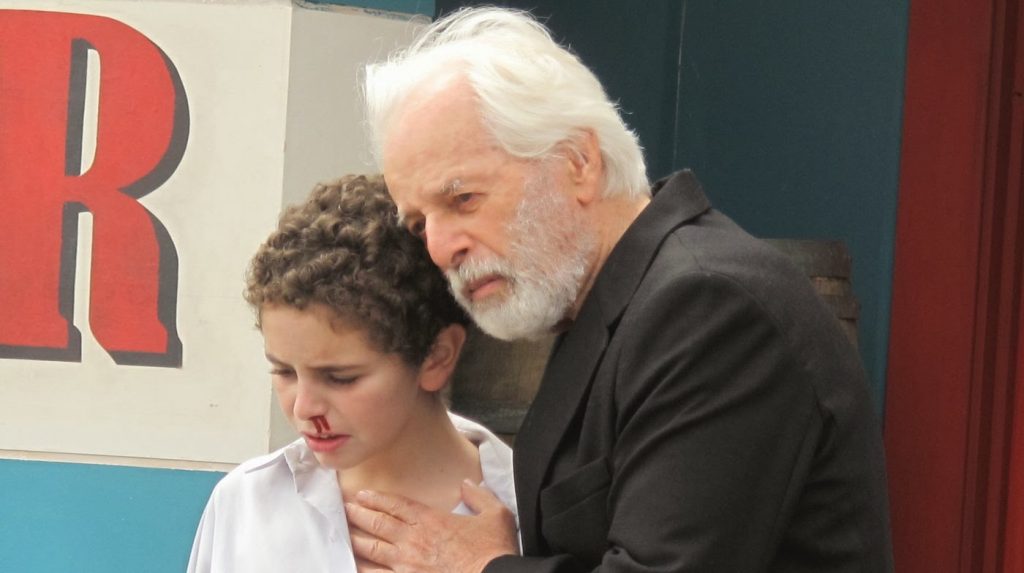 1990’s The Rainbow Thief seemed like it was going to be a sad final note in the career of legendary cult auteur Alejandro Jodorowsky. Run-ins with money-men, attention-seeking actors (Jodorowsky and Peter O’Toole had a bitter relationship) and overbearing studios left Jodorowsky disillusioned with the film industry – and marked the beginning of a 23 year old exile from filmmaking. Much to the surprise of his fans, Jodorowsky has returned with a bang in the form of major new work The Dance of Reality, a surrealist biopic packed with a magical Jodorowskian flair as the director recounts his early years and his turbulent relationship with his father.

The Dance of Reality centres around young Alejandro’s life in the small town of Tocopilla in Chile. Here the director recounts life with his free-spirited opera singing mother (Pamela Flores) and Jaime (Brontis Jodorowsky) his tightly-wound Communist father – a man who idealises Stalin and plots to murder Chilean dictator Carlos Ibáñes. The latter portion of the film follows Jaime in his attempts to take down Ibáñes that are ultimately thwarted and lead to his breakdown.

The Dance of Reality serves as Jodorowsky’s attempt to cleanse and heal the wounds caused by his brutal father Jaime – with Jodorowsky’s son Brontis describing the film’s events as a “remake of the past” with his father’s mysterious and elaborate flair added. Jaime is an alienating character with Brontis playing the role with an almost theatrical rigidness – a man who moves like a cold dictator being watched by his terrified subjects. This becomes ever more apparent when we see his relationship with his family. Jodorowsky’s latest could also be read as a continuation on the themes from El Topo. Just as the titular character from the director’s acid Western tells his seven year old son that he is a man after burying his first toy and a picture of his mother, Jaime is on a constant mission to make Alejandro a man. We see Jaime push his son to various limits by slapping him repeatedly followed by a trip to the dentist when the young Alejandro gets a tooth removed without any anaesthetic. Here we get a glimpse at exactly what shaped the rebellious and dreamlike filmmaking style of Jodorowsky and the rigid, authoritarian structure that he fought against.

This is a memoir that emphasises the dance over the reality – and that is exactly what we want from a Jodorowsky picture. Filmed with gorgeously elaborate visuals packed with bright colours and campy novelties, Jodorowsky showcases the transformative powers of the human psyche and the dreams that it crafts. Sequences like a young Alejandro being warned by a Theosophe that if he throws rocks in the ocean he will “kill all the fish of the world” resulting in the fish of the ocean crashing and floundering on a large beach – are sheer visual delights that capture the magic of Jodorowsk’s world. Camp circus performers, misjudged cripples and Jodorowsky’s operatic mother help the director craft a dreamlike world that flows in a similar vein to his earlier, tripier works. Perhaps the most memorable new style the director adapts is by appearing on camera as the older version of himself – the elderly man with snow white hair and an immaculate beard appears a means of consoling his younger self, in one scene stating: “You are not alone. I am with you. What you need is within you. Live!” This is a sweet move that clearly serves as an integral part of the director’s healing process.

The Dance of Reality straddles tones from the absurdly comic to downright harrowing. Jaime’s quest in the film’s second act sees him tortured by Chilean secret police who strap electrodes to his testicles and repeatedly drown him – breaking the man down in similar territory to his earlier works like Santa Sangre. Regardless of how cruel and alienating Jaime is – this is a fate that no man deserves. Yet The Dance of Reality is equally amusing as it is harrowing – highlights include a regular bit which sees a dwarf mascot don a variety of costumes in order to advertise his store and military general Ibáñes judging a costumed dog pageant.

Shot in crisp digital, Jodorowsky’s work has never looked so fresh and beautiful. The town of Tocopilla is crafted with bold colours and gorgeous seaside scenery. With a blend of well-crafted CGI and bold costumes – The Dance of Reality is an unforgettable visual experience that only Jodorowsky could produce.
This a true exuberant masterpiece from Jodorowsky, both a visual feast and ideological one. Filled with a sense of magical realism and mysticism this is a consistently enlightening look at the creation of a titan of cult cinema.

Originally published on The People’s Movies.