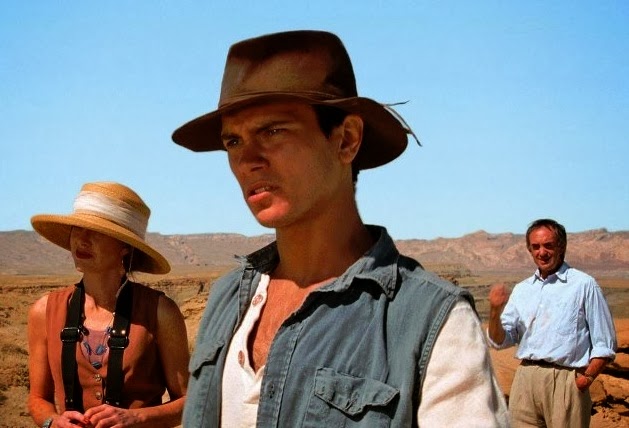 This week saw the UK premiere of George Sluizer’s (The Vanishing) final cut of his incomplete feature, Dark Blood at the 2014 Glasgow Film Festival with the director in attendance. Probably most well known as the film River Phoenix was shooting when he overdosed at The Viper Room in 1993, Dark Blood has become something of a passion project for Sluizer, attempting to complete the unfinished work for several years. With a vast number of Phoenix’s scenes left unfilmed, Sluizer simply fills the gaps by reading from the screenplay – in a move which is surprisingly effective. The director also spoke of his bond with the late-actor and his tense relationship with the difficult Judy Davis who would supposedly drop her lines to put Phoenix off, in his refreshingly honest Q+A session.

Dark Blood centres on struggling film star Harry Fisher (Jonathan Pryce) and his former-playmate wife Buffy (Judy Davis) who get stranded in a desolate former nuclear testing site in the American outback. They are eventually rescued by The Boy (River Phoenix), a young-widower who keeps the pair hostage.

Sluizer noted his film is about ‘skin to skin’ connection, in a wider sense the complexity of human relationships – a continual theme throughout the feature. Whether this be the ailing relationship of Harry and Buffy or the uncomfortable new relationship formed between the Boy and Buffy – human connection thrives in Dark Blood. The Boy is a tragic character who attracts our sympathies yet reflects our horrors. This is a young man isolated and broken through the death of his wife, who sees in an injustice in this world – yet develops a depraved attachment to Buffy. This makes for a fascinating complex character for Phoenix to play, albeit one that ultimately is not as fleshed out as he should be due to the tragic circumstances. This could have been one of Phoenix’s finest moments (yet My Own Private Idaho still claims that title) – this is partly what makes Dark Blood so tragic.

However, Dark Blood touches on several fascinating concepts such as the effects of nuclear testing – particularly on the Native American population. This allows for Sluizer to utilise a truly desolate desert setting with this sun-stroked locale serving as beautiful and darkly atmospheric in equal measure. Considering that the film has been sitting unfinished for over twenty years, it has a staggering freshness and agelessness. The production design remains striking – the Boy’s derelict wooden shack is atmospheric of the film’s dark outback character. However, the most ambitious set is the Boy’s unsettling nuclear bunker filled with Native American symbology and idols which bring a rich brooding Gothic character to Dark Blood.

Sluizer’s voice-over is not as jarring as the concept may seem. The director’s weighty Dutch accent adds a solid gravitas to the feature, and when set against reflective imagery helps us to mentally complete the picture. Further character is added through the casting of Jonathan Pryce who brings a bleakly comic edge to the feature through Harry’s dry British wit and sarcasm, but is equally strong in the heavier dramatic moments where his character desperately seeks escape from the Boy. Davis does feisty well, with the sympathetic relationship between Buffy and the Boy particularly convincing.

Whether or not Dark Blood would have been a classic had it been completed is anyone’s guess, but this remains a fitting tribute to River Phoenix lovingly crafted by Sluizer, a passionate and skilled filmmaker.