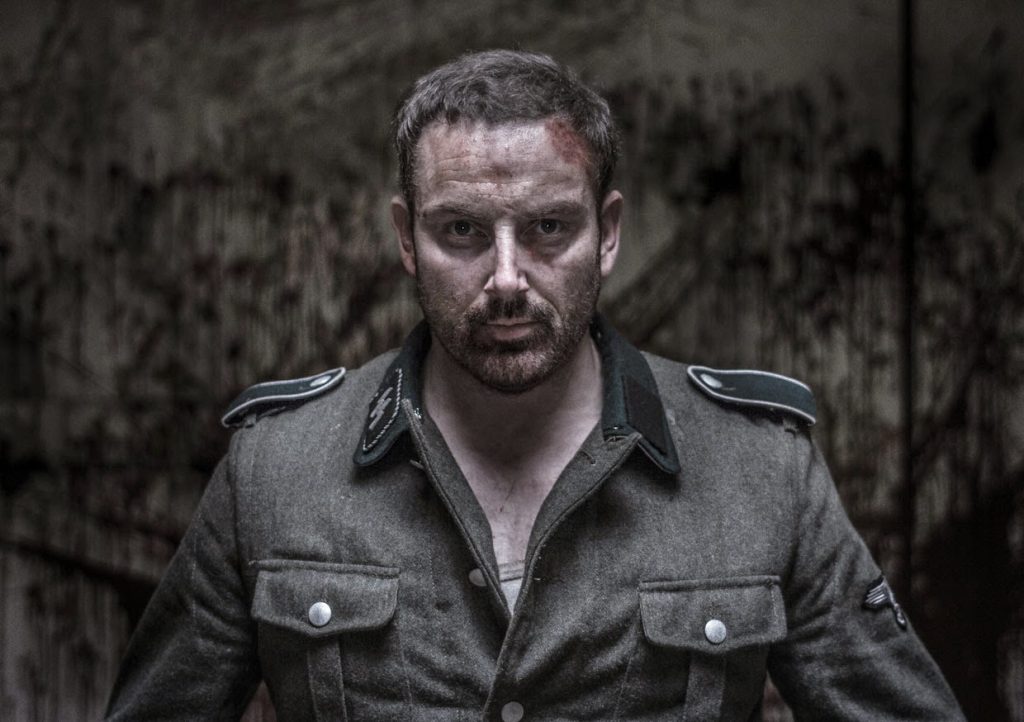 I sat down with actor Bryan Larkin who plays Russian officer Dolokhov in Outpost III: Rise of Spetsnaz before the film’s UK premiere at the last Edinburgh International Film Festival. We had a quick chat about his experience starring in the UK’s biggest zombie film series.

Were you a fan of the Outpost series before starring in the film?
I saw the first Outpost film about a year after it was released – I was making my own film at the same time Outpost was getting made and I knew Arabella (Arabella Page Croft, producer of the Outpost series) and what she had to go through to make the film. It was one of these films that was the first in the genre and I think it surprised a lot of people. Obviously it had a huge following and it did really well. It’s an original concept and very entertaining.

I was talking to Rae Brunton, the writer, and I don’t think he had originally planned a trilogy. They realised the first had been quite successful and built on it with Outpost II: Black Sun which was as successful as the first one. I had actually auditioned for the second film – I’d met Steve Barker (director of Outpost II) and told him I was a fan of it – I never got the role but director Kieran Parker contacted me about Rise of the Spetsnaz. It’s a genre that quite a lot of people would like to work in.

How did you master Dolokhov’s Russian accent?
Mostly by watching Youtube. Getting the depth didn’t come right away, but accents have always been quite a strong point for me. I worked on an American indie film, The Red Machine, where I play a Texan, but I’ve also done Californian and Boston accents, so it is something that comes quite quick to me. The Russian one has a pretty flat sound to it, so I just wanted to try anything that was an opportunity to sound more authentic.

How did you find working in the horror genre?
It’s not something that I ever thought I would be doing – particularly working in Scotland on a horror film. There’s very little effects, Kieran insisted on live-action for the most part and I think if you don’t have a huge budget you just have to go with the real thing. It’s a lot of fun. Watching the make-up department spend five hours on the masks – then seeing them when they arrived on set – it was a fantastic.

How did you find the fight scenes?
[on working with heavyweight fighter James “The Colossus” Thompson] We were doing a fight scene in the cage and he’d never acted on camera before. He’s a big big guy – about three hundred pounds and six foot five and for some reason it just wasn’t selling on camera, so he actually insisted that I hit him – so I punched him in the back and the arm to get a real impact.

I did all my own stunts for the film – as an actor it’s your job to immerse yourself in the project that you are working on. It’s a lot of fun though and you are always looking for something that is a challenge. As I was cast pretty early on I had a lot of time to prepare. Most of this preparation was on size – I gained around forty pounds for the role and there is a lot of fight training and weight training. Kieran had said ‘You can do whatever you want with this part – I’m open to suggestion’ and he didn’t think it was really necessary for me to put the size on but you don’t want to turn up on set on day one of filming and feel like you haven’t done your job. When you bring on someone like James Thompson who is about twenty-four stone Dolokhov has to look like he can kick his ass – so the hours in the gym paid off!

Were there any injuries on set?
I had a bit of a knee injury – I twisted my knee, my shoulder, my finger – It looked touch and go at one point whether I was going to be able to continue filming as the injuries were pretty bad. I had painkillers and strapped my knee, but if I could still stand I was going to complete this film.

The opening of the film has the feel of a classic war film – was this something that you guys set out to achieve?
Kieran’s a big action and horror movie fan and there was a lot of influence from films like the Cross of Iron. The start of the film which sees Dolokhov and the Russian’s dressed in German uniforms creeping through the forest – it is very atmospheric. It’s a great mix of the war and horror genres – and I think that that is part of the appeal. This one is more heavy on the war side of things which opens it up to a wider audience.

Why do you think there has been a boom in zombie films in the past few years?
It’s taken a while for Hollywood to really catch on to Zombie films with the likes of World War Z – I mean you can get Brad Pitt in a zombie film – who would have thought that possible ten years ago? This genre is mostly associated with B Movies, but I think now with genres crossing people are expecting more. They want less schlock and to be more entertained, and I think the genre has had to develop to meet these higher audiences expectations.

Michael McKell’s head Nazi delivers a few one-liners and small jokes. Was it important to make sure there were still light-hearted moments amidst all the war and horror of Outpost III?
There’s nothing wrong with a bit of humour and I don’t think it should be taken too seriously – it’s not high art, we’re talking about entertaining people. Every audience have different expectations – some people are looking for something to criticise. The way that Rae has written the script, the one-liners have a place – but they aren’t played for laughs and I think a lot of people can be put off by that as they don’t know whether to laugh or not. It’s fine – no one is going to remove you from the cinema if you don’t laugh! It’s interesting to see the different audience reactions.

You’ve written, edited and directed before – so was working on Outpost a more relaxed experience?
I enjoy all the jobs equally, but it’s good to be here solely as an actor – there’s definitely a lot less pressure. You’re main responsibility is to give a good performance, but you aren’t solely responsible for the film, you don’t need to worry about too many different things. We had quite a small crew – two units going so it was very quick. It was one of the most enjoyable jobs – firing guns and killing Nazis! The hardest thing for me was staying focused, not getting hurt and not hurting anybody else. It’s quite a high body count and we recycled a lot of the Nazis so some of them were killed about two or three times over.

How was shooting in the eerie Nazi bunker?
That set has been built and remodelled by production designer James Lapsley – it’s actually a warehouse in Stepps (North Lanakshire, Scotland). It’s very cold in there though, we did our best to keep warm – but its hard with all that dry ice in there. Producers Kieran and Arabella are married so it is a very family-orientated unit and it’s like a big toy.

Thanks very much to Bryan for the chat.

Outpost III: Rise of the Spetsnaz hits DVD and Blu-Ray on March 31st.