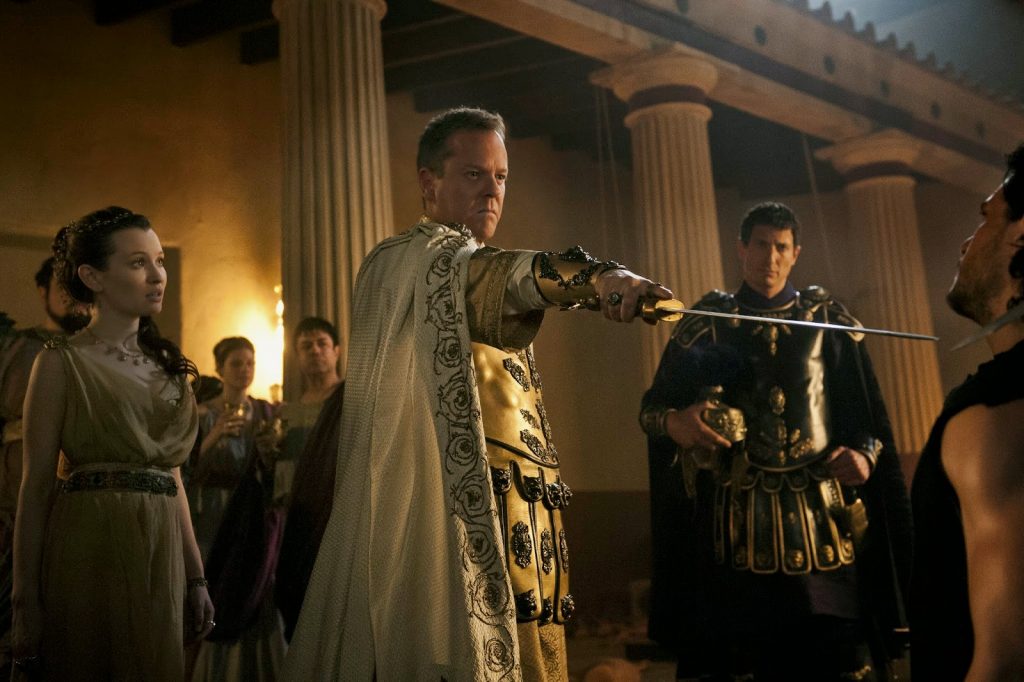 After disappointing at the US Box Office and getting a mauling by many an American critic, Paul W. S Anderson’s “historical” epic Pompeii makes its way overseas to the UK. Perhaps due to this response in the US I had my expectations set low, yet left Pompeii pleasantly surprised. This is not to say Pompeii is a great film – it is a big flailing turkey by all means – however, it is a fun and consistently entertaining watch.

Pompeii follows Milo (Kit Harrington) a slave-turned-gladiator who finds himself in a race against time to save the woman he loves from a corrupt Roman senator (Kiefer Sutherland), whilst trying to survive the horrors of erupting volcano Mount Vesuvius.

Pompeii is a strange creation – Anderson opts for something that is part sword and sandals gladiator epic and part disaster movie. Anyone who has seen the director’s previous works will know that this means genuine historics will be disregarded in favour of glossy gladiatorial action scenes and shiny set pieces – from CGI eruptions to high-speed chariot races. This also means that the Hollywood tale comes complete with contrived love story where two people that have met twice fall deeply in love.

Anderson directs the set-pieces with such a riotous energy that it is hard not to engage. The gladiator battles are impressive – and whilst they lack the grit, blood and guts of the likes of Starz’s Spartacus series, they remain just as ambitious and tense. A sequence which sees Milo and ally Atticus (Adewale Akinnuoye-Agbaje) facing-off hundreds of men whilst chained to a rock foundation is an outstanding moment of action cinema.

Anderson also captures an eerie sense of foreboding prior to the eruption – and although it may lack any subtlety, it still acts as sinister glimpse of things to come. This foreshadowing comes in the form of cracks appearing in the city’s arena and rumbling noises from nearby lakes – which will immediately sends shivers down the backs of a knowing audience. When it comes to the eruption, Pompeii turns into a CGI free-for-all and whilst some practical special effects may have been more admirable, Anderson manages to craft something rather epic in scale. The destruction of the once decadent city is as harrowing as imaginable – with fireballs, tidal waves and earthquakes destroying all that was once beautiful in the picturesque city. There is definitely a morbid fascination that comes with watching the panic in the streets and visual riches being decimated.

The casting of Kit Harrington is one of the main downsides of Pompeii. The actor may be buff, but he’s painfully bland and unengaging here – his lead turn here is the equivalent to Orlando Bloom’s character from Pirates of the Caribbean getting his own spin-off movie. It just does not work. What Harrington’s performance lacks – the rest of the cast make-up for in sheer camp enthusiasm. Kiefer Sutherland channels Tim Curry as a curiously-accented Senator Corvus who doubles as a Nigel Thornbery sound-a-like. Jared Harris and Carrie-Anne Moss add a certain over-the-top charm and whimsy, whilst Emily Browning does her best with the uninspired heroine role.

Pompeii comes packed with clichés and a particularly bland leading turn, but there is a morbid sense of fun to be had. There is plenty to like about Anderson’s glossy epic – mainly the sterling gladiatorial scenes and the engrossing eruption – plus there are a legion-full of laughs to be had from Kiefer Sutherland’s camptastic supporting appearance.

★★★
Originally featured on The People’s Movies.