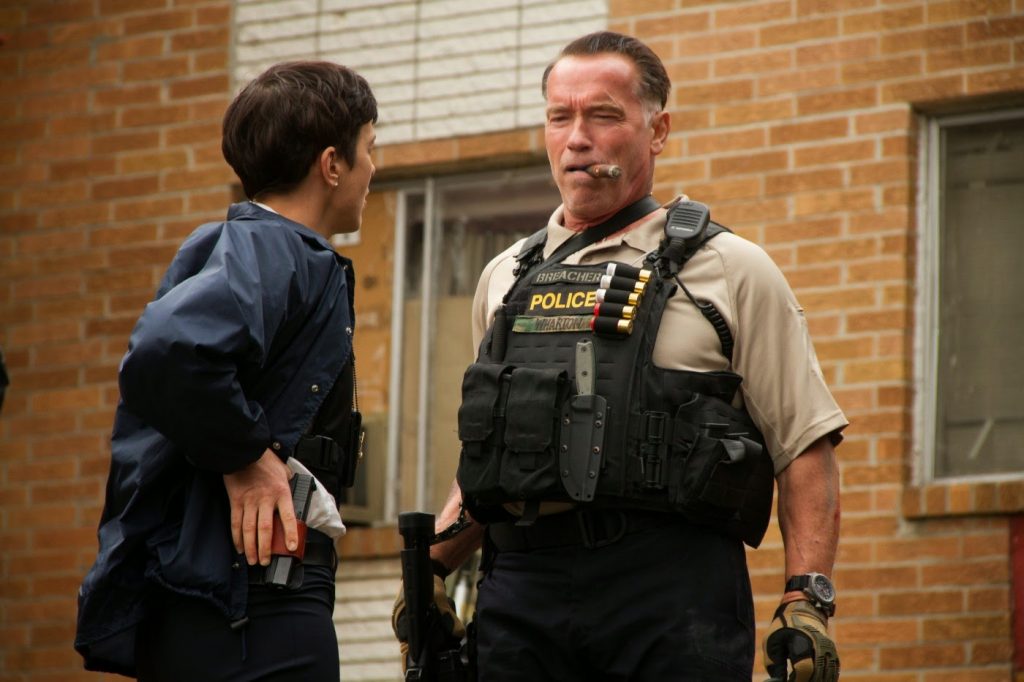 Since leaving political office, Arnold Schwarzenegger’s projects have been enjoyable throwbacks to his heyday: The Last Stand boasted a similar tongue-in-cheek action style to the likes of The Last Action Hero, whilst Escape Plan teamed him up with former eighties heavyweight Sylvester Stallone for clichéd yet fun results. Sabotage, the Austrian action star’s latest film abandons this playfulness instead presenting us with a violent, foul-mouthed whodunnit that unfortunately does not always hit the spot.

After stealing $10m during a raid on a drug cartel safe house, members of an elite DEA squad find themselves being killed one by one. Head of the squad, John ‘Breacher’ Wharton (Schwarzenegger), teams up with FBI agent Caroline Brentwood (Olivia Williams) to get to the bottom of the case.

With End of Watch’s David Ayer behind the camera it’s clear from the onset that Sabotage is going to be a more visceral watch than Schwarzenegger’s recent pictures. The opening sequence makes this further apparent as the squad raid a cartel mansion blasting anyone and everyone out of their path with a barrage of bullets. The action stays loud and blood-drenched which smacks the full weight of Sabotage’s grissly, ultra-violent tone home. At points this can lead to a watch that is slightly too nasty for its own good – most notably when we see a man gutted and pinned to a ceiling or the remnants of someone who has been mangled by a train.

The most interesting angle of Sabotage is the whodunnit one which kicks in with the introduction of Olivia Williams and Harold Perrineau’s FBI detectives – both bringing a well-played humour to the otherwise grim proceedings. The dynamic further shifts from action film to mystery thriller when Breacher and Caroline are teamed up as they attempt to trace the source of the killings. This is where Ayer excels, crafting a tense battle against the clock as the protagonists race to find clues before another member of the DEA squad falls prey to the killer.

One of the main issues with Sabotage lies within its supporting players. The DEA squad are perhaps the most unlikeable, crass, sexist action protagonists in recent years – so it is a real struggle to feel compassion for any of these low-lives whilst they are fighting for survival. Therefore for the most part it feels like there is no real jeopardy and stakes in the action scenes – which makes it a struggle to be drawn in. The worst offenders are Joe Manganiello’s Grinder, Sam Worthington’s Monster and Mireille Enos’ Lizzy who spend their time harassing and leering in strip clubs.

Sabotage actually contains one of Arnold Schwarzenegger’s strongest performances in recent years – which is unfortunate as judging by its domestic run, very few people turned out to see it. We learn Breacher’s wife was killed and tortured by a Mexican drug cartel and he’s hungry for revenge. The last five minutes see him travel to Mexico to finish the business – and will perhaps leave you wondering why Ayer did not stretch that out to feature length.

There is an intriguing whodunnit hidden amongst the grubby, foul-mouthed, visceral aesthetic of Sabotage – whether it is worth enduring or not depends on your taste. However, the action scenes are generally impressive and Schwarzenegger and Williams impress, managing to put most of the rest of the ensemble cast to shame.