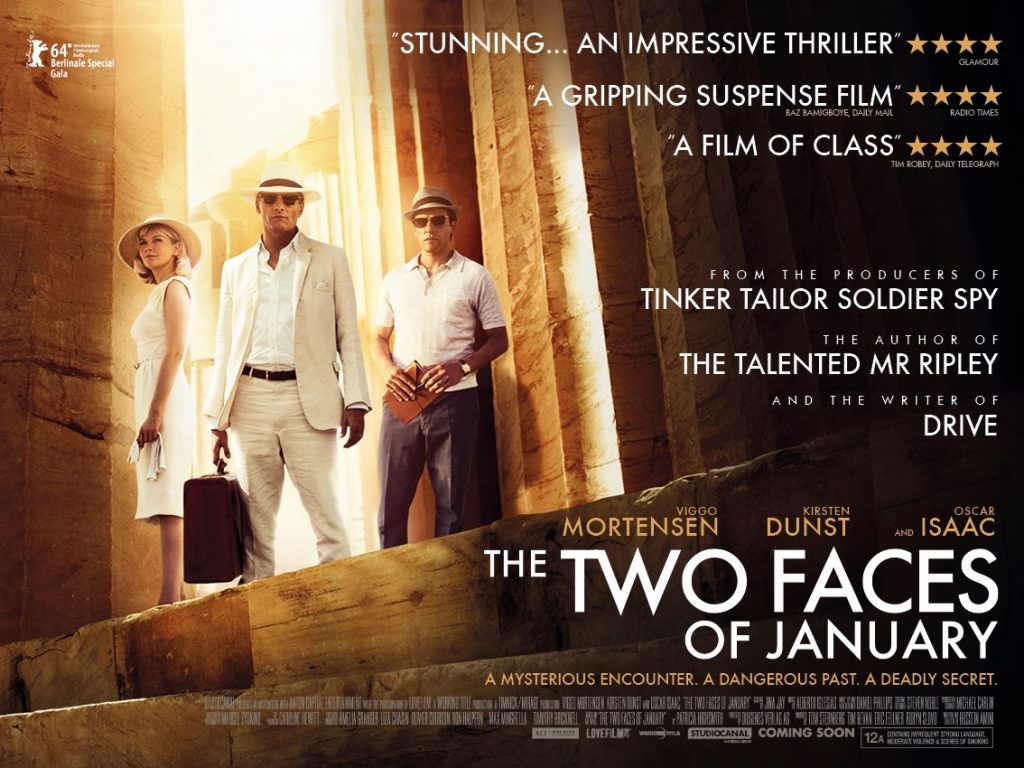 The work of Patricia Highsmith makes a triumphant return to the big screen in Hossein Amini’s adaptation of the late novelist’s 1964 novel The Two Faces of January. Filled with sharp thrills and nostalgic glamour, Amini’s adaptation is one of the most impressive features of the year.

The Two Faces of January follows con-artist/businessman Chester MacFarland (Viggo Mortensen) and his wife Collette (Kirsten Dunst) who are accidentally responsible for the death of a private-eye whilst hiding in Greece. The pair seek help in American ex-pat Rydal (Oscar Isaac) who agrees to help them escape the country safely.

Highsmith is the literary mind behind Strangers on a Train – most famously adapted by Alfred Hitchcock – and the Ripley series which has seen adaptations in the form of Plein Soleil, The American Friend and The Talented Mr. Ripley – and like these adaptations, The Two Faces of January does not attempt to modernise Highsmith’s source work – instead finding and accentuating the nostalgic glamour and noir-like charm found in its period setting. Highsmith’s narrative (adapted by Amini) still feels remarkably fresh and just as gripping – with the focus on betrayal, backstabbing and undercutting – seen through the volatile and distrusting relationship between Chester and Rydal remaining timelessly thrilling.

It is clear that Amini thrives on the unexpected twists in the source novel – and he delivers them here with a tightly wound tension and remarkable style. Seeing the unlikely group travel through Athens and Crete mixes a scenic backdrop with brooding paranoia – resulting in a beautiful yet sinister world where private eyes lurk round every corner and each man is in it for himself (none more so than Chester and Rydal). Comparisons to the work of Hitchcock are inevitable, and Amini has crafted a feature which could arguably be seen as a loving throwback to the golden days of suspense cinema. There are undeniable echoes of The Man Who Knew Too Much – a thriller with a winding narrative, exotic locales, and vintage glamour – albeit there is a little more dirt on Mortensen and Dunst’s characters compared to Jimmy Stewart and Doris Day’s from TMWKTM.

The Two Faces of January is also a real visual feast. Director of Photography Marcel Zyskind captures a staggering beauty in the European setting – from sun-stroked Greek ruins to the equally heated barren countryside. However, it is Steven Noble’s costumes design which ultimately grab the eye here. The vintage class of Mortensen’s cream three piece suits and Dunst’s yellow summer dresses add a huge amount to the rich period character of Amini’s film.

This also marks a striking return to form for Viggo Mortensen (who left us a little cold in Everybody Has a Plan) – despite initially carrying the film with a smooth charm, there is a gritty inner darkness behind the welcoming facade that makes Chester so watchable – especially when seeing the lengths the character will go to to survive. Oscar Isaac is equally magnetic as the Yale educated Rydal – a likeable yet wily tour guide that falls out of his depth. Completing the cast, Kirsten Dunst is at her finest as the Hitchcockian blonde whose purity is slowly tarnished by the effects of her husband’s corruption.