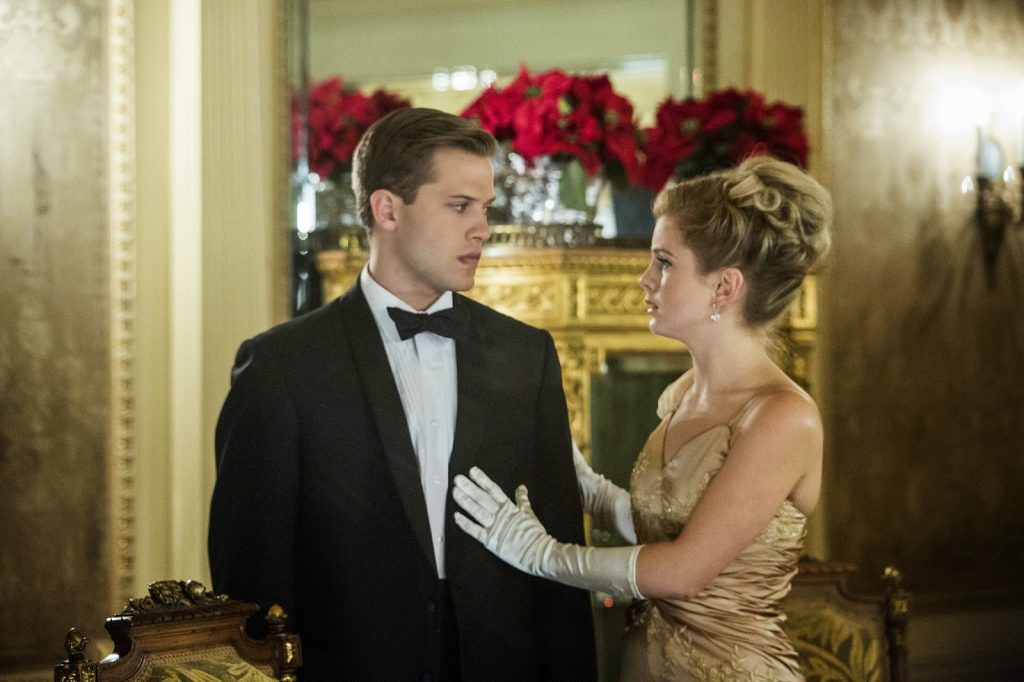 Lifetime’s update of Flowers in the Attic was a surprise hit for the network back in January, debuting to a staggering 6.4 million viewers. It was no surprise that Lifetime went back to the V.C. Andrews’ series for their sequel, based on the author’s follow-up, Petals on the Wind. Despite lacking the focus of its predecessor, Petals delivers an entertaining watch with enough camp thrown in for good measure.

Ten years after escaping from the attic in which their Mother Corrine (Heather Graham) and Grandmother Olivia (Ellen Burstyn) kept them prisoner, surviving children Cathie (Rose McIver), Christopher (Wyatt Nash) and Carrie (Bailey Buntain) attempt to live their life as normally as they can. Cathie is a successful ballerina in a turbulent relationship with her dance partner and Christopher is a doctor romancing the head surgeon’s daughter. However, all attempts a a normal life are crushed when Cathie and Christopher once again fall prey to the romantic feelings which brought them together in the attic. Unable to focus on their new lives, the Dollanganger children decide to track down their Mother and Grandmother to confront their past.

The first act of Kayla Alpert’s (screenwriter of Flowers) teleplay does not feel much like a focused follow-up to the previous film in the series – which is by no means a bad thing, it simply takes some time to be drawn into this world ten years after the events of the first film. Cathie and Christopher now live distant lives to their childhood. Cathie’s relationship with an boorish, womanising ballet dancer feels like typical Lifetime fare – trashy, yet always entertaining. However, we are swiftly reminded that this is based on a V.C. Andrews work when the two siblings hop into the sack again for old time sake. We can confirm that the incestuous subplot here is just as gross as it was in the first film.
Thanks to strong performances from McIver and Nash we do get a sense of the pain and hurtful memories that drive the two together for comfort – but let us be honest, it is still nasty. Things are even more conflicting to watch as Christopher has turned into a 6’2 muscular blonde stud in the form of Wyatt Nash. We wanted to look away but, we couldn’t.
The narrative picks up and returns to the darkly Gothic territory that the made the first film such a success in its third and final act. This see the Dollanganger Children return to Foxworth Hall to confront their Mother. Here Petals legitimately feels like a true sequel to Flowers and we get to see that built up narrative tension chaotically run free. This means there are some solid gold scenes between Burstyn and Graham, with each actress trying to out-ham the other: now-frail Grandmother Olivia can still spit just enough vitriolic abuse at her wide-eyed and moderately insane daughter – played by marvellously over the top Heather Graham. There is some fabulous dialogue that feels like it was taken from a drag act, most notably seen when a wide-eyed Corrine suggests leaving her mother bedridden to “stew in her own juices”.
Graham and Burstyn do not feature here as much as they did in the previous film. Perhaps this is the reason that Petals doesn’t quite reach the same heights as Flowers – the theatrics of the two veteran actresses are missed. Not quite as consistently over-the-top and campy, there are still countless moments to enjoy – such as the scenes between returning star Dylan Bruce and McIver, who both feature in a subplot that is aimed at hurting Corrine. The conclusion is also wonderfully melodramatic and already has us intrigued for suggested follow up, If There Be Thorns.

It may not be quite as good as Flowers, but Petals is a continually engaging watch and well-crafted second chapter to the Dollangagnger story. Hopefully, we can get an increased screentime for Graham and Burstyn in the follow-up as their spark really kicks this series into overdrive.