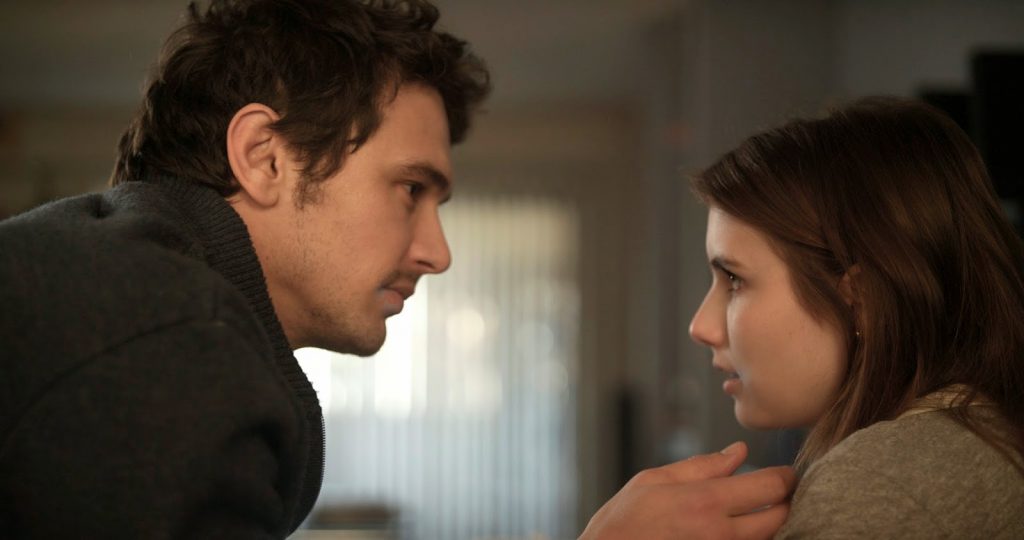 James Franco’s short story anthology, Palo Alto, gets streamlined for the big-screen with Gia Coppola (Granddaughter to Francis Ford and niece to Sofia) at the helm.

Palo Alto follows the restless lives of a group of privileged San Francisco teenagers as they drift through their final years of High School. We see April (Emma Roberts) struggle to find a boyfriend her age and turn to her football coach (James Franco) , as well as the rocky friendship of rebellious best friends Teddy (Jack Kilmer) and Fred (Nat Wolff).

Those that are not fans of the drifting and loosely-structured work of Sofia Coppola may struggle with Gia’s directorial debut. However, it certainly works as a stirring parallel here – capturing the unstructured, isolated , confused and often foolish lives of the teen protagonists here. Set to a mellow soundtrack from Dev Hynes, there is a low-energy pulsing through Palo Alto as the teen protagonists lethargically drift through the issues of high school, romances and dull parties. Yes, it’s all rather superficial but aren’t teens incredibly superficial?

Coppola also does a sterling job at capturing the often-unexplored pressures of teenage life: one of Palo Alto’s most powerful sequences sees April break down after relentless counselling about her college application and what to do when she ‘grows up’. There’s also a fair representation of teenage awkwardness shown through the stilted romantic relationship between April and her football coach and also through a bizarre sequence where Fred’s high Dad (an amusing Chris Messina) hits on Teddy.

Whilst this captures the pressure that teenagers face, Coppola and Franco load Palo Alto with a sense of fun in their celebration of teenagers simply being carefree and making stupid choices. Teddy and Fred’s discussion about the sexual orientation of children’s book characters The Rainbow Goblins is amusing, whilst a scene-stealing cameo from Val Kilmer captures the ongoing struggle teens have with their parents not listening to them. There’s also a laugh-out-loud scene that takes place with an over-zealous art instructor at Teddy’s class who exclaims: “I’m not Bob!”

Coppola strips back Franco’s short story collection and simply focuses on Fred, Teddy and April as core characters. Jack Kilmer is magnificent as Teddy – a generally nice easy-going kid guided down the wrong path due to some foolish mistakes (which the adults of Palo Alto relentlessly remind him of) – most caused by Fred, who as Teddy puts it ‘tries so hard to act crazy’. Palo Alto also provides us with Emma Robert’s defining performance thus far, the actress excels at capturing the effects that isolation and pressure can have on the teenage psyche.

Palo Alto proves that Gia Coppola is another outstanding addition to a rich filmmaking dynasty and Franco as a man who understands the subtle complexities of teenage life.