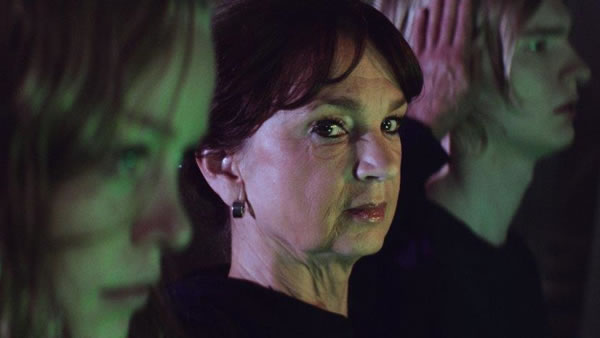 Cult film icon Christina Lindberg returns to the big screen in Swedish sci-fi horror Black Circle. Adrián García Bogliano (Here Comes the Devil, Night of the Wolf) writes and directs this feature which delves in the concept of magnetic hypnosis dipping into the subgenres of body horror and the occult.


After discovering a vinyl record that focuses on hypnosis, Isa (Erica Midfjäll) persuades her self-destructive sister Celeste (Felice Jankell) to listen, swearing that it will change her life for the better. As Celeste begins to notice her productivity and focus increasing, she soon experiences disturbing hallucinations and the feeling of being watched. Both sisters decide to hunt down Lena (Chrisina Lindberg), the shady face behind the mysterious hypnosis record.


Bogliano’s film is steeped in seventies nostalgia thanks to transporting recreations of the corporation behind the hypnosis record’s instructional videos, depictions of the hypnosis process and Lindberg’s calming, hypnotic tones. There’s immediately a conviction and eerie realism in the world that Black Circle crafts – even when things move to the more contemporary Scandinavian setting. Bogliano’s narrative plants seeds of intrigue from early on with the horrifying effects of the mysterious LP not fully being unveiled until the second act.


As the record’s effects begin to rear their head in the form of trippy hallucinations, shot by cinematographer, Dario Goldgel, paired with some gruesome body horror from make-up artist Agnes Arnell – Black Circle starts to come into its own. Bogliano’s direction is sharp and intriguing for these first two acts serving up a sense of tension and some well-crafted genre elements.


An impressive central turn from Jankell is key to much of Black Circle’s success. Celeste is a flawed protagonist and makes an intriguing character study – as we see her negative traits slowly leave her and form her doppelganger. The return of Lindberg (best known for her softcore Swedish exploitation work and her leading turn in Kill Bill inspiring ‘Thriller: A Cruel Picture’) is also an enticing element for cult fans. Lindberg is entertaining as the former Magnetic Hypnosis guru, attempting to fix the lingering problems caused by the process.


Black Circle becomes bogged down in somewhat tiring sci-fi conventionality in its final act when the focus turns to merging the original human with their escaped doppelganger, and subsequently losing some of the nostalgic spark and intriguing body horror that had previously helped it shine. However a strong enough opening two thirds are redeeming enough to recommend Black Circle to genre aficionados.