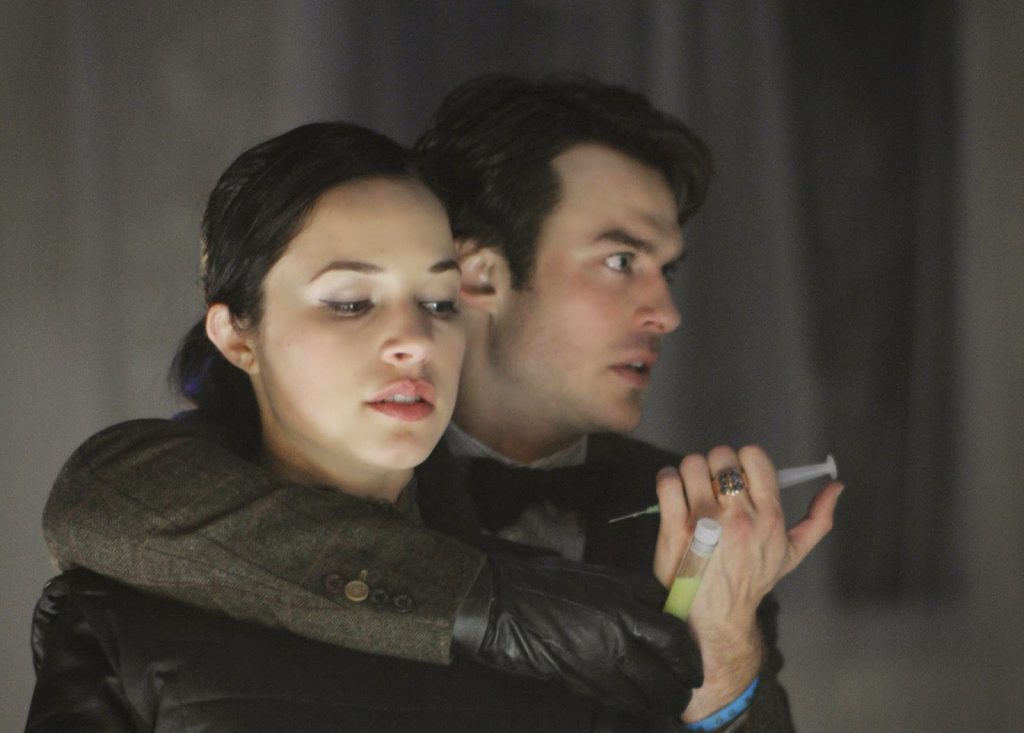 Noel Clarke’s third directorial feature sees him in front of the cameras once again in science-fiction action piece, The Anomaly.

Set in the future, a former-soldier Ryan (Clarke) wakes up holding a young boy captive, with no memory of how he got there. After nine minutes forty-seven seconds, he blacks out waking up several days later in a new location with a mysterious figure (Ian Somerhalder), until blacking out again. In these brief moments of consciousness it is up to Ryan to piece together his surroundings, until he gradually discovers a wider conspiracy featuring bio-technology and mind control.

The Anomaly is reminiscent of these late eighties/early nineties sci-fi actioners like Timecop and Demolition Man. Clarke crafts a believable futuristic universe (well that is until you see billboards for Elysium and We Are the Millers) with sleek silver skylines and glossy technology. This combined with the fast-paced reboot concept (no scenes last longer than 9m 47s) keeps things relatively fresh and allows for the film to play about with a globetrotting structure.

Clarke keeps The Anomaly‘s plot as mysterious as he can with a gradually unfolding narrative that unveils elements of mind-control and nanobots which slowly begin to explain previous curiosities (mostly anyway – we are still left with a few questions at the end). There are a few moments of well-crafted action that keeps the pace fast: scenes which see Ryan take on Luke Hemsworth’s sneering secret agent or a barrage of seedy gangsters manage to stand out.

Clarke could do this small-scale action in his sleep and although not Britain’s finest thesp, he does the English tough guy with a heart shtick well. However, it’s Ian Somerhalder that is likely to command the audience’s attention the dazzling blue-eyed Vampire Diaries star packs a huge amount of charisma and swagger into his villainous role. Unfortunately supporting player Brian Cox does not get much chance to ham it up as he is confined to a strange scientific shoebox for most of the proceedings with very little to do.

The plot does verge on ridiculous at points (especially when characters begin channelling Brian Cox) and some of the dialogue will make your toes curl – all I will mention is the film’s last line “How about you take control?” which is likely to inspire an overload of cringing. These elements can be forgiven as anything goes in science-fiction, and this sleek B-Movie puts fun at its forefront.

The Anomaly is a solid and completely enjoyable effort from Clarke. He makes an impressive on-screen tough guy and shows he can direct action as well as he performs it. An inventive structure and a scene-stealing performance from Somerhalder makes The Anomaly an impressive piece of sci-fi.