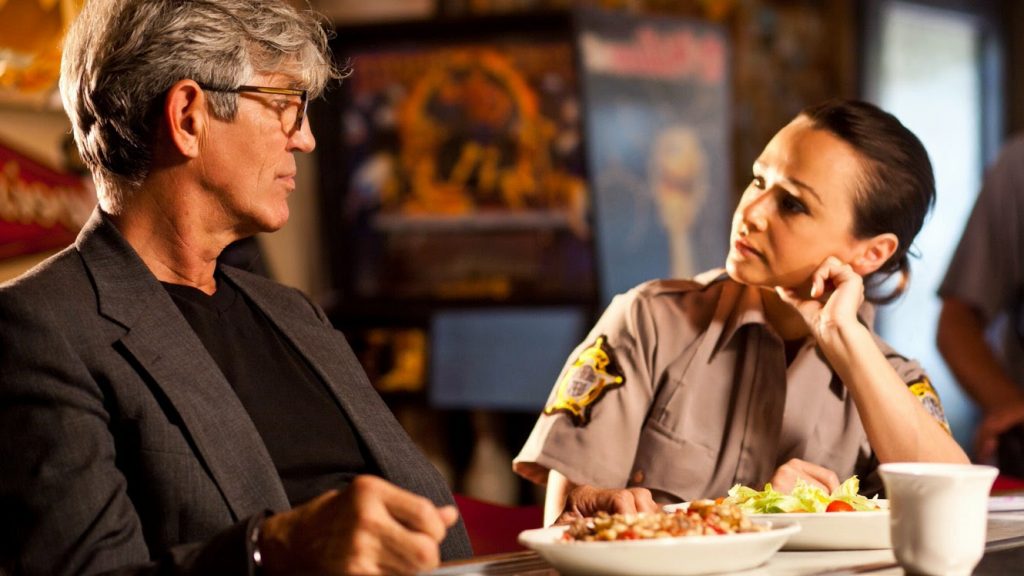 Considering the Summer camp slasher was such an integral part of the horror films of yesteryear, the subgenre seems to have been ignored in recent times. Films like Friday the 13th and Sleepaway Camp continue to have a  mainstream and cult following respectively – but it generally has become an area neglected by contemporary filmmakers. This is until the release of Harrison Smith’s Camp Dread – a gloriously fun throwback to these classic horrors.

Julian Barrett (Eric Roberts) director of the Summer Camp series of eighties horror films tries to resurrect his career with a modern reboot of Summer Camp using a reality television show as its template. However when contestants on the show begin to get murdered in real life, Barrett’s plan unveils a sinister new twist.

Whilst the reality television concept is dated (2001 Maniacs: Field of Screams suffered the same problem), Smith injects enough interest and originality into Camp Dread through its camp setting – with the two striking up an intriguing combination. Mostly just a narrative gimmick, the reality angle does not really hide the fact that this is somewhat of a bare-bones slasher. Smith’s direction is light on gadgets and computer trickery, instead centring his attention on outlandish gore and brooding atmosphere – in an atypically old fashioned style that is completely refreshing to see.

It is clear from Camp Dread that Smith clearly adores the camp slasher: supporting turns from Sleepaway Camp’s Felissa Rose (who is genuinely great here) and an underused Danielle Harris confirm this. There’s also a great intrigue surrounding the character of Julian Barrett which ponders how do these old school horror filmmakers stay relevant in the 21st Century. Robert’s character clearly represents these classic seventies and eighties horror directors (perhaps even Sleepaway Camp’s Robert Hiltzik) and this gives Camp Dread and original almost meta twist.

Whilst most of the victims fit into the token roles with little development or depth – not that that really matters, as the fun of Camp Dread comes from watching Roberts chew the scenery and refuse to hold back. There’s a sinister charm about the character which Smith clearly has fun playing around with – most notably in the surprisingly cheeky final scene.

Camp Dread plays with every expected cliché in the camp slasher film – but has a lot of fun doing so. This is an engaging and tremendously entertaining throwback to these classic horrors, with some clever twists thrown in for good measure. Roberts has never been this wonderful to watch, but Camp Dread is worth a watch just to see Felissa Rose back on screen.