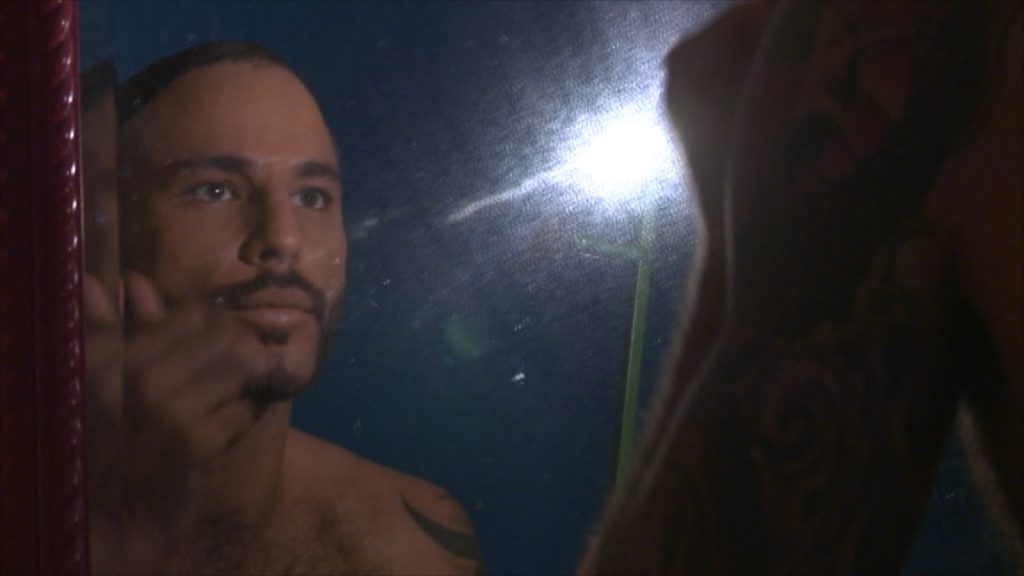 Heymann’s film chronicles eight years and follows Agassi in his current hometown of Berlin and moments with his mother and brother in Israel. Heymann dips into Agassi’s work as an escort and work in Berlin’s live sex shows. Whilst initially Agassi suggests that his lifestyle and career saved his life and gave him direction – the effects of this lifestyle and Agassi’s troubled past begins to suggest otherwise.

The opening moments of the documentary are the perfect encapsulation of the complex emotion at the heart of Heymann’s film. We see Agassi and a co-star sitting backstage at a live sex show, sharing a deep moment of connection as Agassi’s colleague for the night reveals he’s been out of the game since his sister died. Agassi is expectedly shocked and sympathetic. This is quickly followed by the two men stepping onto the stage in a busy German nightclub and getting stuck into an erotic routine. Jonathan Agassi Saved My Life continues to pair these moments of intense eroticism with heartfelt human emotion – exploring the concept of lust and hyper-sexuality coexisting with a more tender type of human relationships.

These words are paralleled in Agassi’s life in Berlin where he follows a life in the sex industry, with Israel which comes to represent most of his personal encounters in his home life. We are drawn to Agassi at the centre of the narrative – initially due to his highly charged sexuality. The hairy muscular Israeli has a brooding intensity, yet a buoyant sense of fun, but as Heymann’s film progresses – we see the tender relationship he shares with his supportive mother, his brother’s struggle with Agassi’s sexuality and the fractured relationship with his rarely-present father. This exploration of Agassi’s home life helps showcase him as a magnetic figure and lay some of the emotional and psychological groundwork that preceded his career in the adult entertainment industry.

Agassi bravely opens up with 100% honesty to the cameras – exploring his love-hate relationship with his excessive lifestyle – the effects of which become fully apparent in the hard hitting final few scenes of the documentary, where Agassi’s binge is captured in uncomfortable detail. Not making any outright judgements shaming the porn industry, Jonathan Agassi Saved My Life presents one man’s story and experience with this world – in both positive and negative lights. Heymann’s documentary also taps into the sexualisation of Israeli men – the near fetishisation of the military stereotypes of the culture. This is an interesting little titbit that would have welcomed some further examination.

Jonathan Agassi Saved My Life is an uncompromising look at a fascinating individual – intimate and consistently honest, this is an engaging look at one man’s experience in the adult film industry.